Samsung has always been big in the software features and extra value department and there were a lot such additions to note in the Galaxy Note7. However, with the untimely demise of the flagship phablet, at least a few of these goodies are destined to slip into oblivion as well. 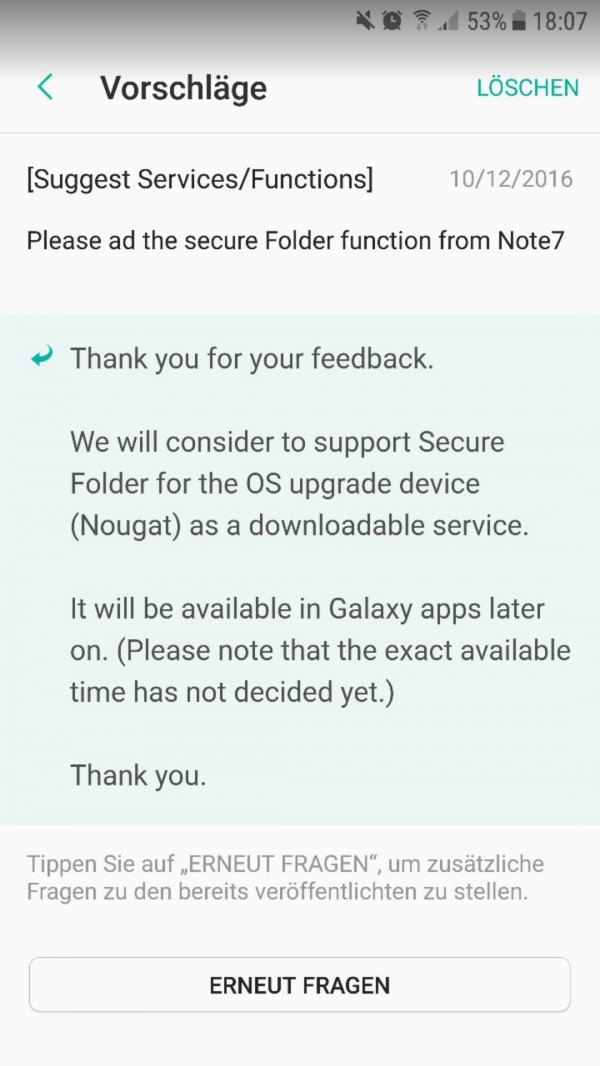 Thankfully, the awesome Secure Folder feature might see the light of day yet again. According to a message, in reply to a Galaxy Beta program user, Samsung is considering to bring the feature as a download to the Galaxy S7 and S7 edge handsets. This, theoretically means distributing it as an app to the Galaxy store. From what we can gather, Android Nougat will likely be a requirement for the platform to run, so there is still some waiting to be done for the update to hit.

Secure Folder is accurately described by Samsung as a second phone inside your handset. On the surface, it appears as a protected folder that can be locked up using a fingerprint and even hidden from the UI, along with all its contents. But besides regular multimedia files and documents, it can also store apps. It even allow a second instance of an app to run independently, meaning you can use it for a nifty second IM account.

Samsung has also gone through a lot of hoops to make everything that goes on in Secure Folder absolutely encapsulated and private. There is a separate shortcut for the camera app, which automatically saves shots and videos in the Secure Folder itself. There is even a separate dialer, with secure contacts and a call log that don't show up in the regular interface.

Sadly, no extra information or time frame estimate has been provided at the time. We will be sure to keep you informed if more details become available.

It's pretty similar to what i am using now on Galaxy S6 edge. My knox. You can have anything secured (virtually new another phone).

Tell him. These features are usually for our friends and families who are likely to ask for our so that they play with it. It's not for geeks. I'm with, bro.

I always wonder why other OEM don't include this feature in their ROMs. Local privacy is also very important in phones. We are even scared to leave our phones with friends because of lack of such useful feature. Keep it up Sammy. I love HTC but on t...