We know that Samsung is working on a 5-inch 1080p Super AMOLED display for Q1 of this year – it was on a roadmap on its booth. Now DDaily is reporting some more concrete dates – according to industry sources, the display will enter mass production at the Samsung Display plants near the end of this month. 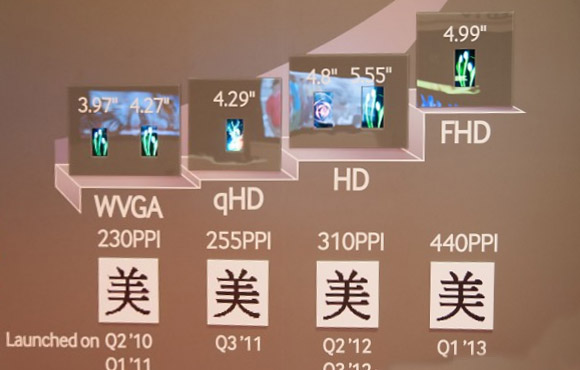 The display units will reach Samsung Electronics in early March – just in time for an April launch of the Samsung Galaxy S III successor. Or maybe they'll manage to produce enough units for a late March release.

The screen will have 440ppi pixel density and according to DDaily will be manufactured using Samsung’s FMM (Fine Metal Mask) method, which points to a PenTile display. Even if that is the case though, we doubt it would matter much at that pixel density.

DAMN YOU pentile mATRIX!! Never buying another one again

I hope they fix the amoled blacks this time around. I've noticed that the higher pixel density amoled screens equate pretty directly to the blacks looking more and more grey as the PPI goes up. Original 480res galaxyS and S2 almost look like th...

This is very true and most people have their smartphones (regardless iphone, sony, samsung or htc etc) plugged into the socket during work. Hell, my Nexus 4 is plugged into my laptop at the moment keeping the battery topped up :P