Samsung is trying really hard to not leave an empty spot in the mobile market, so the Galaxy Note 8.0 announcement shouldn't be a surprise. The compact tablet follows the same design guidelines as all the other Samsung high-end devices announced in the last year or so and has set its sights on the Apple iPad Mini.

Samsung has given the Galaxy Note 8.0 an S Pen and the slew of Touch Wiz-exclusive software features to help it in its battles. Driving them is the company's Exynos 4 Quad 4412 chipset with four 1.6GHz Cortex-A9 CPUs, Mali 400MP4 GPU and 2GB of RAM.

Here's a quick view of the Galaxy Note 8.0 features list.

Samsung Galaxy Note 8.0 at a glance:

Sounds familiar, doesn't it? The Samsung Galaxy Note 8.0 is little more than an upsized Galaxy Note II. Or is that a downsized Galaxy Note 10.1? The only differences are the new S-Pen software features that come with Android 4.1.2 and the latest TouchWiz, but those have already been made available to the Note 8.0 predecessors. 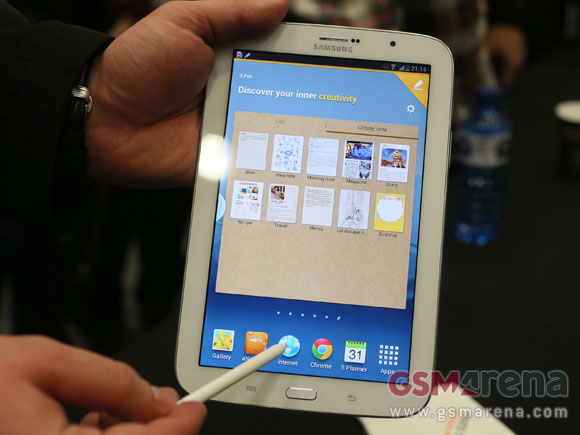 The screen is of the TFT PLS variety and the resolution of 1280 x 800 pixels sounds like last season's stuff. This results in 189 pixels per inch, which may not sound like match, but it's still more than the iPad Mini's 162 ppi.

As for the camera, it's a 5MP sensor capable of shooting 1080p videos @ 30fps, coupled with an LED flash. Join us on the next page to learn more about the hardware features of the Galaxy Note 8.0, a compact tablet which can make phone calls.

can the note 8 really make calls