Samsung Netherlands has begun accepting pre-orders for the Galaxy S6 and Galaxy S6 edge, which revealed the official price in mainland Europe. Both versions will ship on April 10. 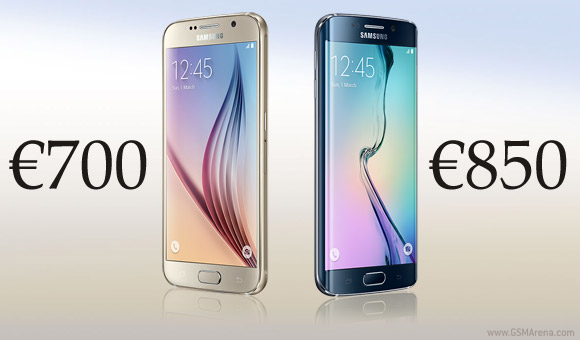 The flat-screened Galaxy S6, the 32GB model, is priced at €700. That's the same price that the Galaxy S5 (16GB) launched at last year. That was also the starting price of the Galaxy Note 4 late last year.

The Samsung Galaxy S6 edge commands a hefty premium for its three-sided display. The 32GB version is €850, that's €150 over the regular S6 model. The Galaxy Note Edge carried an even bigger premium initially, so we'll see how the price difference evolves.

For comparison, a Dutch retailer has the HTC One M9 listed at €750. Samsung's UK shop just says "Coming soon" for both S6 versions now, but earlier it let it slip that the Galaxy S6 will go for £700.

Note that there's no microSD slot this time so you might want to consider going for a bigger storage option. Those aren’t available yet, but there should be 64GB and 128GB versions of the Galaxy S6.

So, the jump in price per each storage increase varies between €100 and €150. The lack of a card slot is definitely felt, considering a 128GB microSD is around €90 right now. Ouch.

Thanks to Michel and Kushal tipping us off!

I usually don't like Samsung's flagships, but I will probably get the S6. On the main two points it's been criticized: - non-removable battery - you can get pretty sweet portable chargers, which combined with the fast charge option must be suffici...