The Samsung Nexus Prime has appeared in a user agent profile (UAProf) on the Samsung website. The device model number will be I9250 and it will have a 480x800 (WVGA) resolution display. Previous rumors hinted at a 720p screen ala Galaxy Note, but that's obviously not happening. 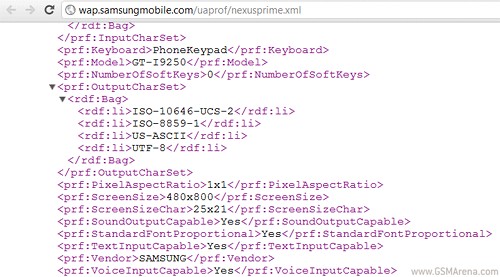 There's nothing else that we can deduce from this leak, but previous rumors suggested that the Nexus Prime will pack a 4.5-incher of the SuperAMOLED (Plus or not) variety and a Exynos chipset with a dual-core 1.5GHz processor.

Last, but not least it will feature the latest version of Android - 4.0 Ice Cream Sandwich.

Update: The page is no longer available. Hat tip to Annkur for sending in this info.

Great to hear that it might have a metal case, my only concern about Samsung making it was that they'd go for their usual plastic. Held off getting a Sensation for this so hope it's worth the wait. http://n0whereelse.blogspot.com/2011/09/samsung-ne...

Hey this tough competition to apple...dual core1.5 means they will soon invent 7-8Ghz ......now samsung is launching phone by every month....o_O=-O;-)O:-).....cooooool. Iam waiting for ice cream sanswich.....sorry for all gramatical mistakes iam now ...