Samsung has just officially announced its latest cameraphone running Android and it's called the Galaxy S4 Zoom. It's basically a hybrid between the Galaxy S4 mini and the Galaxy Camera, combining solid smartphone functionality with the versatility of a zoom lens and a proper flash. 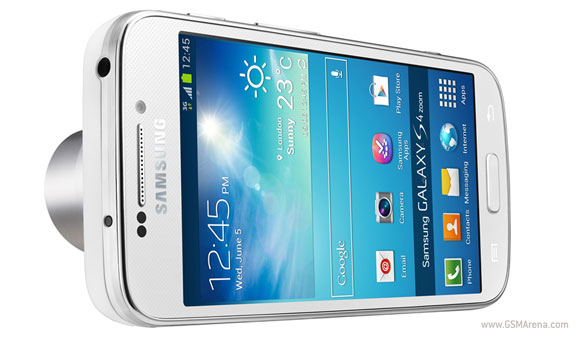 The Samsung Galaxy S4 Zoom is built around a 4.3" Super AMOLED display with a resolution of 960x540 pixels and Corning Gorilla Glass 3 for protection. Under the hood the smartphone sports a 1.5GHz dual-core processor and 1.5GB of RAM. The hybrid has a footprint similar to the Galaxy S4 mini, but is notably thicker at 125.5x63.5x15.4 mm.

It's also notably heavier at 208g, but that was to be expected given the much larger camera module and the proper grip.

The key selling point of the Samsung Galaxy S4 Zoom though, is its camera, which has 16MP sensor, a 10x zoom and a xenon flash. It's capable of 10x optical zoom, which is less than the 21x zoom of the Galaxy Camera, but has nicely sounding 24mm wide lens, which we believe is more important.

The Galaxy S4 Zoom is capable of 1080p video recording @ 30fps (and 720p@60fps) and on paper sounds to be a promising snapper. The smartphone runs Android 4.2.2 with Samsung's TouchWiz coating on top.

The battery has 2330mAh, so it should be able to take you through a day of smartphone usage and calls even if you do more than the occasional photo.

Since we had the chance to play with the Samsung Galaxy S4 Zoom, we bring you a few live photos of the device.

The internal memory is 8GB, expandable by up to 64GB via the hot-swappable microSD card slot. Connectivity options include Wi-Fi a/b/g/n, Bluetooth 4.0 LE and A-GPS. The Samsung S4 Zoom will be able to make phone calls and supports 3G with HSPA and even LTE connectivity.

The Galaxy S4 Zoom is expected to hit US and UK shores by the end of Q3 this year or as early as summer. Pricing is still unknown, though. Be sure to check out our in-depth Samsung Galaxy S4 Zoom preview for photo and video samples.

For all you haters did you ever even actually see this phone, but I dont mean just by looking at it online either, I mean at the store and check out the pictures it takes. Probably not, which just means that it is just another reason for you guys to...

i like it but, its very havy phone battery power is not inef.

someone wrote about nokia,s pure viwe but really it cant compet s4 or even s3.