After sending out a pretty obvious invite about its special event on August 15, Samsung has just officially announced the Galaxy Note 10.1. 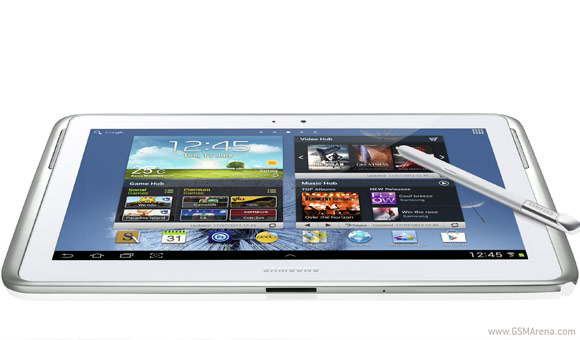 This is the second appearance of the Galaxy Note 10.1 after it was returned to the R&D center for a specs update and now the tablet is as ready for action as it could be. It comes with Samsung's very own Exynos 4412 chipset with a quad-core 1.4GHz processor, Mali 400MP GPU and 2GB of RAM.

As its name suggests, the Samsung Galaxy Note 10.1 comes with 10.1" screen, which as usual for the company's slates is of the PLS TFT variety. It features a resolution of 1280x800 pixels, making for a pixel density of 149ppi.

The Galaxy Note 10.1 comes in 16GB, 32GB and 64GB versions, all of which feature a stylus dubbed the S Pen. This time around though, the tablet offers a slot for the S Pen, instead of making you carry it separately.

Just like the original Galaxy Note, the 10.1 comes with some exclusive apps to take advantage of the stylus, including S Note, S Planner, Crayon physics, Adobe® Photoshop® Touch, and Polaris Office. There's also palm rejection support, so you won't hit any buttons by accident with your palm when drawing with the S Pen.

The Samsung Galaxy Note 10.1 comes with a 5MP main snapper with LED flash and a 1.9MP font-facing camera for video conferencing. There's also a microSD card slot, and on the 3G models - a SIM card slot, as well.

Samsung also released a rather lengthy introductory video of the Galaxy Note 10.1 Here it is.

Offered in silver and white, the Galaxy Note 10.1 will come in three connectivity options: a WiFi-only version, a WiFi-and-3G HSPA-Plus connectivity version at launch, and a WiFi-and-LTE version later this year. The tablet is available in Korea, Germany, the US and the UK. It'll gradually be rolled-out to other global markets some time this month. European pricing is set at €479 for the Wi-Fi only version and €599 for the 3G-enabled units.

You can check out our hands-on video and live photos of the updated Samsung Galaxy Note 10.1 over here.

We can all get into war of words son. I've been using a nexus for sometime now and have not yet downloaded any anti virus nor have I had any issues with the OS or the phone. Just thought I'd let you know. It feels nice to actually have a homescre...

A stable platform that doesn't crash as often as Android/ Better apps coz the devs choose to make apps for iOS first/ Much more secure/ No need for a bloddy Anti-Virus unlike Android----- Don't get me started mate. I don't wanna get in war of word...

"those on Android might be losing out on something that iOS offers" Please tell me MOARRRRR!!