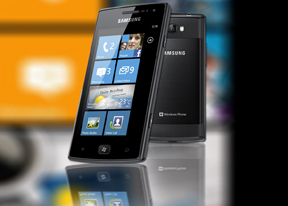 The Omnia W's retail box adds no bling to the package. You get the standard issue MicroUSB cable and charging adapter, a dedicated 3.5mm headset and the phone itself. A memory card is omitted for obvious reasons.

The Samsung Omnia W is a very compact phone, with solid, professional looks. Its exact measurements are 115.6 x 58.8 mm and at 10.9 mm it is reasonably slim too. The weight has been reduced compared to the Omnia 7 by nearly 23 g to the svelte 115.3 g.

The Samsung Omnia W bets on clean design and solid build. There is a hint of the original Omnia 7 styling in the angular front and backward receding edges. The handset does well to keep a neutral professional appearance while setting itself apart from the slew of curvy Samsung droids.

The Omnia W fits comfortably in the hand and feels solid but not too heavy. The finish mixes quality plastic and a bit of metal. Overall, it's a subtly elegant, grown-up design that will appeal to business users.

The Samsung Omnia W up close

Although not the full 4" of its predecessor, the Omnia W's 3.7" screen is a definite advantage over some phones by the competition. The display has WVGA (480 x 800) resolution and Super AMOLED quality, meaning great contrast, deep blacks, and commendable outdoor performance. The PenTile matrix is not such a big deal this time around. On a 3.7" WVGA screen it's not as unpleasantly visible.


Above the display are the proximity sensor to disable the screen during calls, along with an ambient light sensor for auto brightness and a secondary VGA video camera. WP7 doesn't natively allow video calls but Samsung have found a workaround so videocalls are possible on this one. Also, the popular cross-platform app Tango has recently been made available for Windows Phone too.

Below the display is a hardware Home button, set within its own metal frame, and two capacitive controls: Back and Search. A long press of the back key launches the task switcher as usual.

On the right side of the Samsung Omnia W there's a Power/Lock button placed near the top and a soft and responsive shutter key with distinct half press for locking focus. The camera button overrides the screen lock to launch the camera in a matter of seconds.

The right side: Power/lock button and shutter key

The volume rocker is the only control on the left side of the Omnia W. Pressing the volume keys anywhere in the interface - including the lockscreen! - will open a small pull-down menu with basic music controls.

Volume keys on the left

At the top of the device there's only a 3.5 mm headphones jack. The bundled earphones are nice but you can go with just about every set available.

The top of the Samsung Omnia W

The only microphone on the Omnia W is located at the bottom along with the microUSB port for charging and PC connections.

The 5 MP camera lens is located at the back of the device along with a single LED flash and the loudspeaker grill. The back panel has a brushed aluminum inset. At first you might be miffed as to how to remove the cover but once you realize the panel has more to it that the aluminum plate you'll be just fine. The entire back piece is a battery cover and there's a small groove at the bottom left to put a finger a pry it open.

On the back of the Samsung Omnia W

Removing the back panel reveals the 1500 mAh Li-Ion battery, which is quoted at 370h of stand-by and 7h of talk time. The Omnia W does well enough in real life too. We could usually count on two straight days with the habitual serving of browsing over Wi-Fi, a couple of hours of video playback and the usual amount of stills and videos. AMOLED is a power-efficient screen technology and the single core architecture isn't a battery drainer either.

Removing the back panel

The Samsung Omnia W is a nice phone to handle and we appreciate its understated elegance. It falls in the right niche, size-wise, to be a crowd pleaser. The 3.7" screen is perhaps the best fit considering that Windows Phone offers WVGA only resolution. It's a Super AMOLED too - the right kind of screen to enjoy the stylish Metro UI on.

In terms of design, the Omnia W does well to distance itself from the countless carbon copy Droids that Samsung have in the midrange. And by the way, a distinct personality is a must for Windows Phone 7 handsets, which are hard to tell apart on the inside.