This sure looks like a non-starter. Comparing Windows Phone handsets is about as constructive as deciding which is right and which is left in a pair of socks. HTC and, to a lesser extent, Samsung have been making sure though there's no shortage of phones to choose from. And now with Nokia pulling their socks up to stay in the smartphone game, the choice is even greater.

Today our focus is on the Samsung I8350 Omnia W and the Nokia Lumia 710. For a change, they step out of the shadow of their bigger, more capable siblings. In fact, the entire Windows Phone range finds itself struggling to catch up with the general trend towards higher screen resolution and multiple-core processing. The first WP7generation was thrown in the deep end while the fresh Mango-running crowd has a seemingly easier task of staying afloat in the midrange. 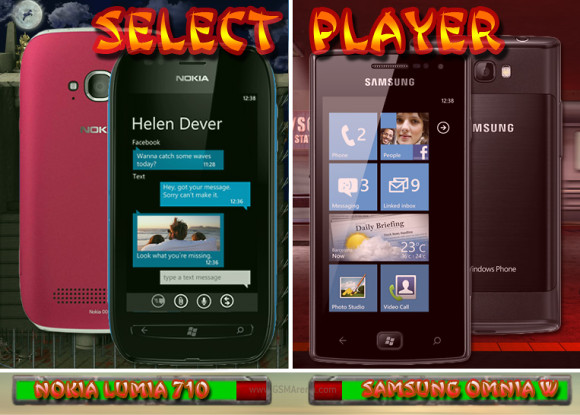 Phones like the Omnia W and Lumia 710 are likely to be considered even by first-time smartphone users and that's one of the reasons why we think this comparison may be helpful. The two handsets are almost on par pricewise and the same goes for most of the specs too. We have a 3.7" display each and it's tie in imaging too: 5 MP still cameras with 720p video. Both have the same processors and run the most recent version of Windows Phone 7.5 - Mango.

But here's where it gets interesting.

Much of it will come down to personal taste, but there's enough to tip the scales either way. The Super AMOLED screen is a massive point in Omnia W's favor, but the Lumia is keen to raise the bid with Nokia Drive - the company's free voice-guided navigation system.

We'll get busy exploring the major aspects of the performance of these phones by pitting them against each other in various tests: still cameras, video recording, audio quality and battery backup. As usual though, we start off with the build and finish.