If you're still wondering when to expect the Samsung Galaxy Note 4 on store shelves in your particular country, this is clearly for you. The Korean company has posted an image of a map with a release timeline attached to it on its Facebook page.

By quickly scanning it, you'll be able to know whether you'll see the Note 4 in your country by November 5, or if you'll have to wait some more. 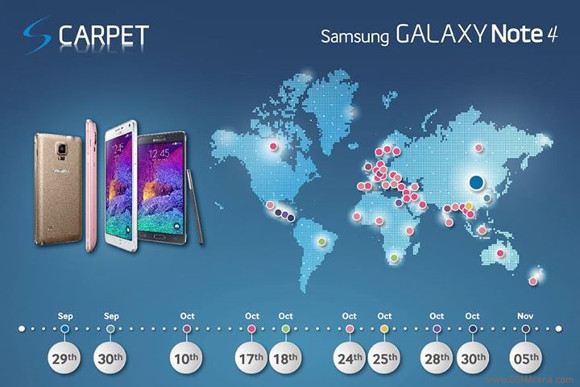 It is true however that in some territories (such as Europe) those dots are very much obscuring the places they're on top of, so for certain countries the Note 4's release date may still require a guessing game. And it doesn't help that some of the dots have incredibly similar colors.

On the other hand, it appears that Canada will get it on October 17. For the UK, we might be looking at October 10 as the launch date, while most of Western Europe should have it available a week later, on October 17.

India could be receiving the phablet on October 10. At an event in Singapore, Samsung revealed that sales would commence over there on October 11, followed by Thailand on October 13, Myanmar on October 15, Cambodia on October 17, Vietnam on October 24, and Laos, Indonesia, and the Philippines on October 25.

10 Oct ,As Samsung Egypt Said & It Might Be White Only For Few Weeks Black will Be Available Shortly , But Why They Not Release " Edge " In Egypt

when is the note 4 coming to Egypt?

It doesn't look like the link to facebook works. Did Samsung take it down for some reason?