Samsung decided against customizing the P1000 Galaxy Tab gallery and went for the stock option instead. It’s quite functional, automatically locating all you images and videos and sorting them by folders and it even syncs up with your Picasa web albums.

There’s also plenty of eye-candy with cool 3D effects and some nice transitions. The different albums appear as stacks of photos, which fall in neat grids once selected. Each time you select a stack from the gallery (that is automatically named after the folder) the background changes to a blurred version of one of the images within.

The gallery is cool but for a fatal flaw

There are tons of options for a picture – you can crop or rotate it directly in the gallery. The Send feature offers quick sharing via Picasa, Email apps, Bluetooth or MMS.

Checking out a single photo • the available options • zooming in

The pinch zooming is also available here thanks to the Samsung P1000 Galaxy Tab multi-touch support.

Unfortunately, zooming in on the Galaxy Tab doesn’t reveal any more detail. Obviously the gallery displays only a downsized version of your images and you need to transfer them to a computer if you're into pixel-peeping.

Video player is a treat

Samsung were keen to promote the P1000 Galaxy Tab video player and they have good reasons for that. In addition to the DivX and XviD video support, it also delivers smooth performance in up to Full HD video resolution.

Of course not all Full HD content is a go, but if you keep the bitrate reasonable you’ll be fine. And chances are 720p will always work – the Tab had no trouble with our testing clips, that’s for sure.

If you feel like spending the extra cash for the multimedia stand you can also get 1080p TV-out, making the Tab pretty good at home entertainment center duties. DLNA is also there if you need it.

There is a nice feature that automatically splits the videos into separate scenes so you can skip directly to a specific part.

The video player automatically splits the movie into scenes

There are still a few things wrong with the video player. First MKV files didn’t play for some reason, but you can fix that with a third-party video player from the Android Market.

Watching a video on the Tab

Also we noticed that there’s dithering in some of the samples, which wasn’t present when we played the videos on a computer. It’s not so bad as to have a great impact on the overall experience but we felt it’s worth pointing it out.

Finally, we tried loading subtitles in English and they worked just fine, but there's no charset setting, so non-Latin languages may have issues.

Music player got a new interface too

The Galaxy Tab music player got a treat similar to the email client with two tabs. The filtering criteria entries (artists/albums/genres etc) are on the left, while the currently selected one gets its tracks listed on the right.

The music player got an update too

In addition, Samsung has enabled equalizer presets on the Galaxy Tab. The great feature that allows you to quickly look up a song on YouTube or via Google search is also here.

The now playing interface and the available settings

The handset also prompts you to select whether to look up the artist, the song title or the album. What's even better, the YouTube search results are loaded straight into the YouTube client.

And with the added eye-candy, album view and song scrolling, things are about as good as they could get.

Samsung also added the music hub app here, which allows you to browse, purchase and listen to music from one place. The library is quite extensive so if you feel like getting a track from here, chances are it will be available.

Unsurprisingly, the Samsung P1000 Galaxy Tab passed our audio quality test with flying colors. It did even better than the already pretty good I9000 Galaxy S, but that's little surprise considering that the engineers had much more room this time.

As you can see the Galaxy Tab performs excellently when an external amplifier is used and there is only slight deteoration when headphones are attached. The stereo crosstalk reading took the biggest hit, while the intermodulation distortion and dynamic range were also affected but still remained great. 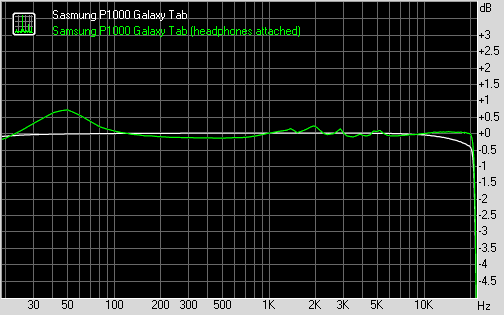