We had sore eyes for the notch when it first became a thing. People argued that it broke the phone’s symmetry and disrupted the continuity of its design. Of course, one answer to that would be smartphones with dual notches (1,2), but let's hope we never see the day where those go mainstream.

About a year ago, Samsung filed a patent with the KIPO (Korean Intellectual Property Office) and its details have just been published, the following mockup render comes from LetsGoDigital. Since the patent is simply for the design of a display, its description is not very informative. 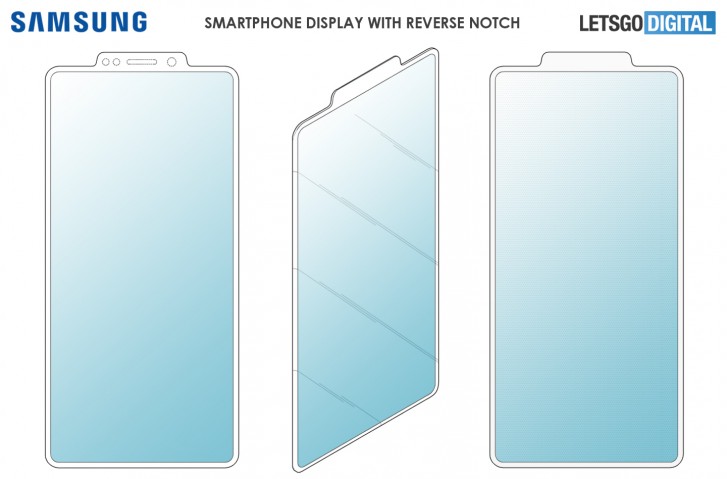 In order to maximize the size of the screen, a notch could be placed above a fully sized display, but we wonder how a device with such a display would actually look. At that point, wouldn’t the phone maker be better off just adding an upper bezel to make room for the cameras, speakers, and sensor cutouts?

This isn’t the most elegant solution to maximizing screen real estate, but it is one we have seen other brands express interest in. We don’t think we’ll be seeing any smartphone with a “reverse notch” any time soon. If we do, we’re interested to hear that company’s rationale for designing and manufacturing a handset in such a way.

You completely wrong! Sony no use any notch for flagships. The notch only can found on entry phone >>> L4

Notch and hole are compromise designs. For aesthetic both are ugly too, a straight line is always welcome, a notch or hole is be an eyesore, that's why people as for dark mode to hide it, very funny!! Furthermore the user are not very happy watch the...