Samsung officially presented two of its latest mobiles. The Samsung F490 is a full touch-based handset with a large TFT display, while the Samsung P720 will be the second dual-SIM handset by the South Korean manufacturer.

The Samsung F490 looks much like the Samsung F700 it's seated next on the press photo. It will have a slim profile, a 5 megapixel camera and haptic touch feedback. The 3.2-inch touch-sensitive TFT display has a resolution of 240 x 432 pixels. The Samsung F490 will appear in the beginning of 2008 and will cost around USD 600.

There are three touch-sensitive keys right under the display and the Samsung F490 is also equipped with 3G and HSDPA. With its 5 megapixel camera it pretty much resembles the LG KU990 Viewty. Unfortunately, the display doesn't seem to be capable of changing orientation to landscape mode like the Samsung F700.

The Samsung P720 is somewhat based on the Samsung Armani model, however it will offer DualSIM functionality. The handset will have a QVGA touch sensitive display and a 3 megapixel fixed focus camera - much the same as the original Samsung P520 Armani. The Samsung P720 will be targeted at the Eastern Europe and Asian markets. 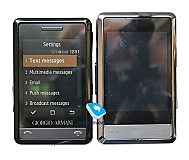 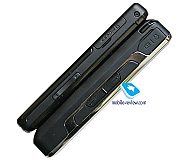 And as promised here is the hands-on video with the two spanking new devices Samsung F490 and Samsung P720 plus the already available in some countries Samsung F700.

Is the Samsung P720 released to Denmark yet or will it ever come to us ? or where can i buy it ?

hello...everyone! thus anybody know when would be the samsung f700 will be released in the philippines??i wanna buy that phone...how much???thanks guys...