In a rebuttal to the published video where a Galaxy S6 edge gets bent beyond repair, Samsung has issued a statement complete with a video detailing its own testing procedures. The company claims that the SquareTrade test does not indicate typical usage scenarios and is also not indicative of the phone’s face-down rigidity. 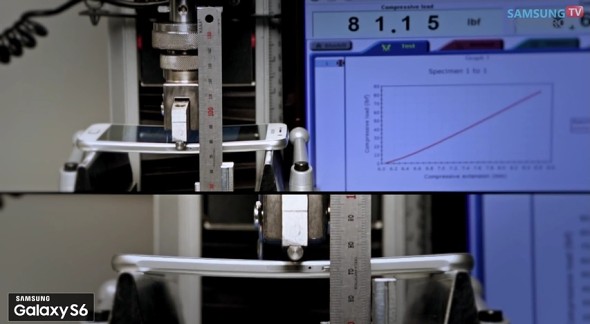 In the Samsung video, which opens up with a quick disclaimer, that it’s not inspired by sadistic desires, the complete bend test routine is shown on both the Galaxy S6 and the Galaxy S6 edge. A three point rig is set up with the appropriate software to measure the applied force.

To put an everyday meaning into the numbers a set of 5 pencils is subjected to the same test and reaches a breaking point just shy of the 80lbf (108Nm) mark. Then the Galaxy S6 takes the stage and survives a slightly larger force just fine, returning to its original shape. The Galaxy S6 edge fares equally well, both face down and up.

In the previous bend test, the Galaxy S6 edge was subjected to a good 110lbf or 149Nm, cracking and becoming unusable. The iPhone 6, the one that started the whole bend craze, died at 179lbf (243Nm).

While all this might please the number-crunching crowd, for the general public it means that manufacturers are acknowledging the bending problem, and doing their best to minimize its effect.

Samsung test should not convince you 99% of the time i remove my phone from my pocket i treat every phone I've had with the greatest respect I've had my s6 around three months and it is bent when i took my phone to a Samsung repair centre they said t...

OK when it's about samsung, everything's perfect... Please reread the item: the Galaxy S6 edge was subjected to a good 110lbf or _149Nm_, cracking and becoming _unusable_. And the reminder about the iPhone : The iPhone 6, the one that sta...

The thing is. This phone bends in that pressure. Fine, but it gets back to it's form without any damage. That (not getting back to normal) was the problem with the first bendgate issue.