Samsung is definitely no stranger to showmanship, as evident by its grand unveiling events. However, those are usually reserved for its top of the line models, like the annual Galaxy S and Note editions. The rest of the OEM's lineup typically gets a formal announcement as well, but it seems the Korean giant has decided to skip the formalities with the new 2016 edition Galaxy J1. 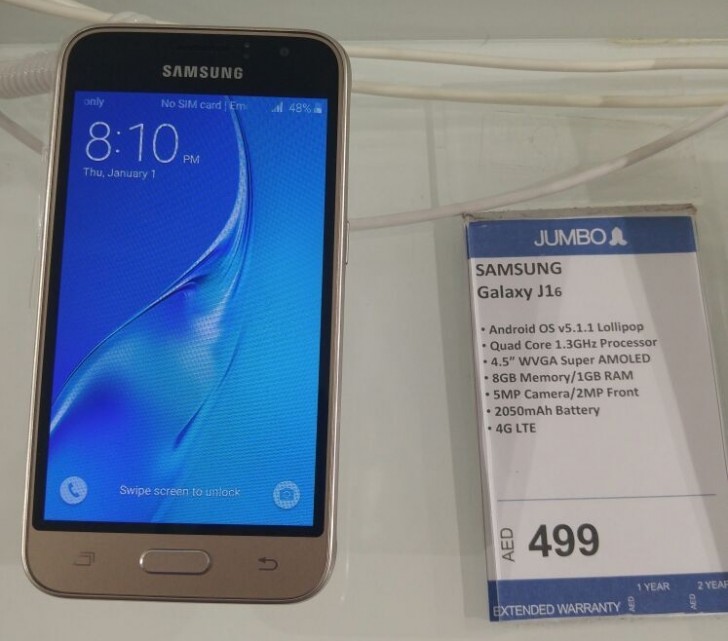 The phone went from leaks and renders, straight to sales as it's now available at a number of electronic stores in Dubai. On the plus side, this surprise arrival does eliminate the need for any more speculation regarding the handset's specs and price tag.

The new Galaxy J1 retains the budget-friendly nature of its predecessor. It is equipped with a 4.5-inch display, with a resolution of only 480 x 800 pixels, but still using Super AMOLED technology.

Running the show is a quad-core chipset, clocked at 1.3 GHz, probably the Samsung Exynos 3475 SoC. Memory is set at 1GB and there are 8GB of onboard storage. The camera setup of the 2016 J1 consists of a 5MP main shooter and a 2MP front one, just like its predecessor. Powering the show is a 2,050 mAh battery. The new Galaxy J1 also comes with 4G connectivity in its base version – a feature you could get with the old J1 as well, but only if you spring for the J1 4G or J1 Ace.

Thanks, Jomichan George, for sending this in!

Am in Zambia and am interested in buyin the sumsang J1

I want to buy a sumsang J1 ace