After the successful collaboration with Giorgio Armani on the special edition of Galaxy S, Samsung is now friends again with Hugo Boss as back in the days of Samsung F480. The fruit of the their new cooperation is the Galaxy Ace Hugo Boss edition. 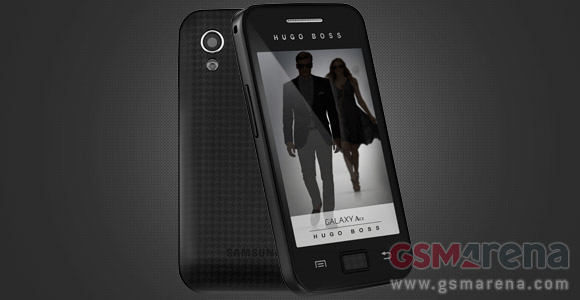 After taking a look at it you can clearly see why Samsung and Hugo Boss dub this device as being specially tailored to the lifestyle of the fashion brand's customers. The smartphone has a matte black finish abd the back cover has been given special treatment from the designers over at Hugo Boss.

But the modifications don't stop on the outside. The Ace Hugo Boss also features special wallpapers to make your Hugo Boss stand out from the crowd of Samsung Aces even further.

Unfortunately, that's about the changes the special collaboration between the two companes brings to the table. Hardware-wise, the Ace Hugo Boss has not changed a bit from the original. The smartphone still features a 3.5-inch 320x480 pixels screen, 800MHz single-core processor, 5MP autofocus camera and the usual Wi-Fi, Bluetooth and microSD slot found on most Android smartphones.

Happily though, the Samsung Ace Hugo Boss runs Android 2.3.3 Gingerbread and will be available pretty soon at selected Hugo Boss stores as well as on their website. There's no official pricing but we spotted a store that has it for about 280 euros taxes included. If you can afford Hugo Boss costumes, that sort of cash should be pocket money to you.

The reason is why this device can't play graphicly demanding games is because of the CPU and the GPU because the processor is so small (800mhrz)if the game could be downloaded onto the device it would be very laggy also the GPU which is an adreno 200...

and im the same problem its 2.2.1 and i cant update to 2.3.6 im tried with kies and download the update but nothing change