Outside of the typical monthly schedule, which brings in the latest Android security patch, Samsung has released new firmware updates for the current flagships Galaxy S7 and Galaxy S7 edge. The timing is extraordinary, but then so is the nature of the updates.

Unlike the usual generic release notes that cite unnamed bug fixes and performance improvements, these latest releases address very specific issues. The first one on the list is perhaps the one that's hardest to understand, but the summary is that screen clarity when using Always On Display has been improved. 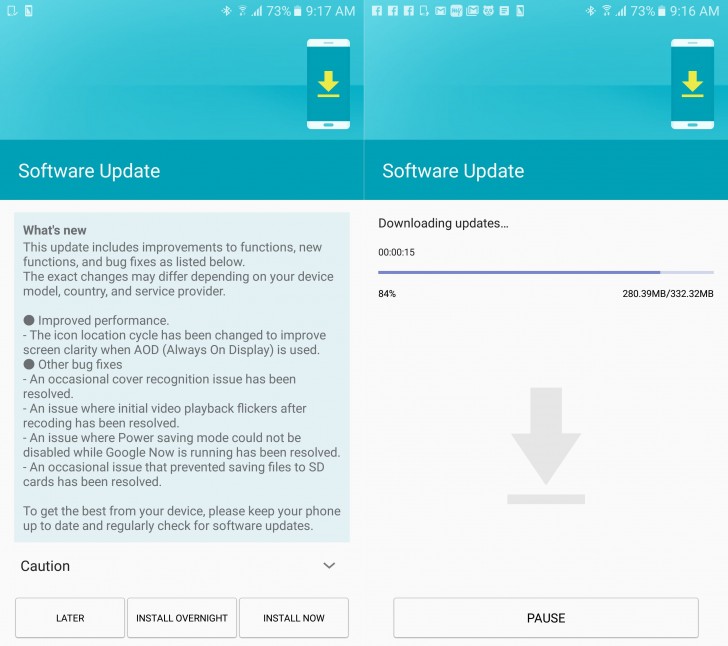 Other things being fixed include cover recognition, flickering video playback after recording and being able to turn off Power saving mode with Google Now running. The occasional issue of not being able to save files to microSD cards has been dealt with, as well.

Now, you may not have experienced any of those, but that's no reason not to go through with the updates when they arrive (ours haven't yet). Oddly, for such a short and specific list, the firmware files are quite hefty, at 332MB and 353MB for the S7 and S7 edge respectively. Some bugs they must have been.

My S7 Edge at random will not let me disconnect when hitting the Red close call button, and....on some in coming calls it will ring 3 -4 time before any information will appear onto my screen too respond too. My Family in Dallas Texas experienced t...

Same happened with my S7 edge after update it seems completely dead. I sent a e-mail to Samsung Support and ask for advice. How is it possible that they are sending out updates that are not tested as they know it is not making problems for the custom...