Samsung's Android lineup in the United States just got a serious dash of toughness with the addition of the Rugby Smart for AT&T Wireless.

The handset is built up to mil-std 810f military spec standards. It is dust proof, shock resistant, and can be be submerged in 1m of water for 30 minutes. Extreme temperatures are also handled by the device. 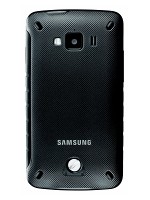 The phone specs include a 3.7" WVGA Super AMOLED display, 4GB of built-in memory, and 5MP snapper, capable of shooting 720p videos. Full connectivity suite is present sans LTE. The OS on tap is Android 2.3 Gingerbread. Strangely, the CPU and amount of RAM are not available at the moment.

The handset will be available exclusively for AT&T on March 4 for $99.99 with a two-year contract. The carrier has released a handy video, which showcases some the talents of the Samsung Rugby Smart. See it below.

We are already itching to find out how tough it is in our hands, so expect some live impressions from the Samsung Rugby Smart in the nearest future.

Somebody who works in conditions where he needs a durable phone, so he is not afraid it will break after couple of days. Don't mix apples and oranges.