Samsung S3600 gets announced, while Samsung i7110 leaks

The Samsung i7110 is the next Symbian smartphone with a 5 megapixel camera and enhanced multimedia capabilities - at least as far as rumors go. In the same time Samsung released a lower midrange handset - the Samsung S3600, which borrows its looks from the Soul clamshell Samsung G400, but offers entry-level specs and no external display.

This is not the first time the Samsung i7110 leaks - we've reported it back in August. This time a new image of the device leaked and it seems some redesigning has taken place. Plus we now know more about its high-end specs.

We are eagerly waiting for the official announcement of the Samsung i7110, which seems to be this month.

The Samsung S3600 however is the handset that saw its announcement today. Banking on the well-received Soul-design the Samsung S3600 brings a bit of style to the masses.

The clamshell sports a metallic body with no external display. The main display of the S3600 is a large 2.2-inch 65K color TFT display, which however has a rather low resolution of 176 x 220 pixels.

The Samsung S3600 has quad-band GSM/EDGE support, Bluetooth 2.0, USB 2.0, and FM radio with RDS and broadcast recording. The 30MB of available memory can be expanded up to 2GB thanks to the built-in microSD card slot. 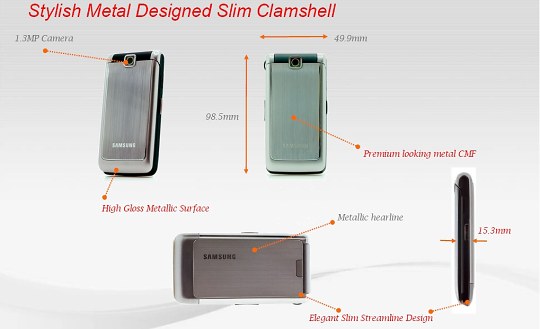 Unfortunately, we don't have information on the planned availability of the Samsung S3600, but it seems Samsung will try to push as many units as possible so worldwide market availability sounds reasonable. The expected price of the device before subsidies or taxes is 80 euro (or 110 US dollars).

Nokia is wonderfull, great phones and the best phones for the regular people who only listen to music, write messages etc. Then you're best of with the Nokia phones Samsung is ten times better if you look at the design and the function that's a fac...