The Samsung S7230E Wave 723 is capable of taking 5 megapixel photos and it features geo-tagging and smile detection.

The Wave 723 camera viewfinder is identical to the original Wave and very much the same as the viewfinder on other Samsungs regardless of OS. The comfortable interface is nicely touch-optimized and has all you need on the two vertical bars on each side of the viewfinder.

In the settings menu, you can toggle things like ISO, white balance, effects and auto contrast. Scene presets and macro mode are available too.

The Wave 723 produces very nice photos for a 5-megapixel cameraphone. The amount of resolved detail is very good and noise levels are kept under reasonable control.

The results from the Wave 723 are comparable to the photos produced by the much pricier S8500 Wave, even slightly better. Here's an impromptu shootout we did with the two.

We also snapped our resolution chart with the Samsung S7230E Wave 723. You can check out what that test is all about here. 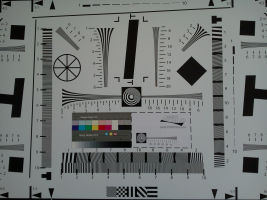 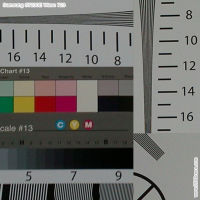 Unlike with the still image camera, the S8500 Wave and S7230E Wave 723 live in completely different worlds when it comes to video – the Wave 723 manages only QVGA@15fps videos.

Clips are captured in .MP4 file format and are at the better end of the QVGA@15fps spectrum but that’s hardly saying much – we wouldn’t use them for anything but MMS.

The camcorder interface is similar to the UI on the still camera and identical to the camera UIs on other Samsungs (again, regardless of their OS).

Despite the mid-range standing of the Samsung S7230E Wave 723 it actually features some pretty advanced connectivity. There’s quad-band GSM/GPRS/EDGE of course but also dual-band 3G with 7.2Mbps HSDPA.

On the local wireless connectivity front you get the best available – Wi-Fi b/g/n and Bluetooth 3.0. The microUSB port can connect as Mass Storage (shows only the memory card), DRM Media, Samsung Kies (shows both internal and external memory) and Internet sharing.

Speaking of Internet sharing, thanks to the Mobile AP you can also turn your S7230E Wave 723 into a wireless router for connecting up to three Wi-Fi clients that will use its HSDPA connection for Internet access.

Wi-Fi with WPS is also at hand. WPS stands for Wi-Fi Protected Setup and it's a hassle-free way to pair a wireless device with your secured network. As long as your wireless router supports the feature, pressing the dedicated button on it allows it to pair with the Samsung Wave 723.

The Samsung S7230E Wave 723 packs a Webkit-based Samsung Dolphin Browser 2.0. You can have multiple pages opened at the same time and there is Flash video support on board.

The screen on the Wave 723 is multitouch enabled and pinch-zoom works like a charm. Unfortunately, there is no text reflow (dynamic refitting of text to match the width of the display area).

Auto-complete is available when entering an address, which is sure to save you a few taps if you’ve visited the site before.

Find-on-page is also available and the interesting Translate option – you mark some text and hit translate, which opens up Google Translate in a new tab with the text pasted in.

As we mentioned the browser has full Flash support running all embedded Flash videos within the webpage itself. Our test unit failed to display Flash correctly, but given that the significantly more powerful S8500 Wave couldn’t keep the video and audio in YouTube in sync, we’d recommend using the mobile version anyway.