The 5 megapixel camera lens is on the back, a single LED flash and the loudspeaker grill at its sides. The camera lens is slightly recessed, but it still might get damaged if it hits an edge.

The 5 megapixel camera is the star backstage

Underneath the rear cover and the battery itself are the miniSIM and microSD card slots. The battery is a 1,700mAh unit - we would have fancied a larger capacity, but our tests show that even this one does a reasonable job.

We ran our array of battery tests on the Samsung Galaxy Xcover and gave it an endurance rating of 48 hours. In the individual categories, it lasted just over 10 hours when calling on a 3G network, a bit over 6 and a half hours of web browsing over Wi-Fi and 7 and a half hours for video. 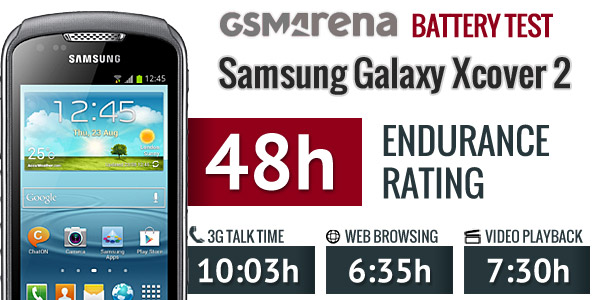 The rounded corners make the phone comfortable to hold and we already mentioned the grip-enhancing patterned back and ribbed sides. It's not a small device by any means, nor is it lightweight, but you should have no problems pocketing the phone (especially if you're wearing a comfy pair of pants).

It's not something we'd strap on an arm band and go running though, so wireless headphones are a good idea if you want to listen to music while you jog. A wired headset is also an option, if you don't mind the wires sticking out of your pocket.

Samsung Galaxy Xcover 2 in the hand

The Samsung Galaxy Xcover 2 has a 4" LCD screen of WVGA resolution. That gives it a reasonable pixel density of 233ppi (the Galaxy S II and S II Plus have 216ppi). The glass covering the screen is scratch resistant but not Gorilla Glass.

We also snapped a photo of the display with our digital microscope. It shows a standard LCD RGB matrix. 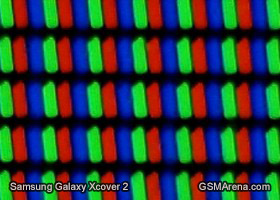 The screen has good viewing angles - colors are unaffected, while contrast suffers only at extreme angles. Unfortunately, neither colors, nor contrast are particularly good on this screen to start with. Colors aren't very saturated, which further brings down the image quality.


The screen is very reflective, which is a problem for outdoor use. Indoors, the contrast is not bad actually, but bright light has a negative impact on the sunlight legibility.