Samsung announced the time and date of its next Unpacked event. The Korean giants next major mobile product announcement will take place this month, on February 24 in Barcelona, right at the MWC kickoff. 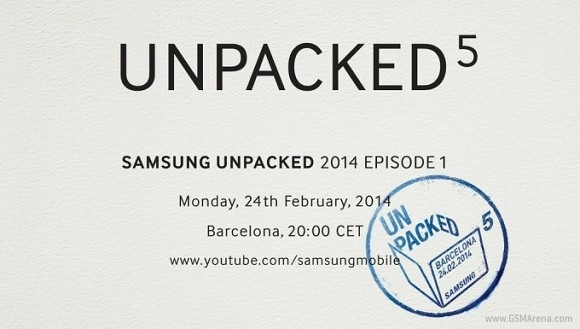 The invitations contain more than a subtle hint that the Samsung Galaxy S5 will break cover during the event. They have the number 5 on display which is as clear a suggestion as it gets in our book.

A potential appearance of the Samsung Galaxy S5 during the Mobile World Congress guarantees it a great deal of spotlight. Samsung was relatively quiet during last years MWC and did not announce any flagship products.

Rumored specs of the Samsung Galaxy S5 include a 2K display and 16MP f/2.2 camera. The smartphone is tipped to launch with a revamped TouchWiz user interface sitting on top of Android 4.4 KitKat.

I am waiting for s5

Considering the extremes of competition Samsung has in other OEMS it is actually well ahead. And that is just popularity...When it comes to real world "Society and popularity blind belief put behind" almost anything is better and more reali...