Samsung sells almost a third of all smartphones in Q1

According to DRAMeXchange, a division of the TrendForce market analysis group, first quarter smartphone shipments in Q1 were up to 216.4 million units globally, with almost 30% of those being made by Samsung.

Things aren't as bright over in Apple's camp, as the iPhone 5 didn't gather as much interest as new Apple flagships usually do, which has resulted in a dip in the company's predicted market share. 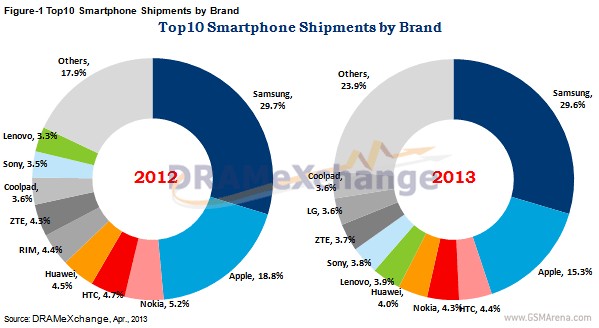 In what has usually been a battle of Apple and Samsung vs. the rest, it seems like the rest are fighting back this time around, as Apple's loss is reflected in the growth of other manufacturers like Sony and Lenovo.

The Chinese market was privy to some great disappointments from its domestic brands, with Huawei, ZTE, and Lenovo all had a 5-15% decrease in their sales estimate for Q1. This is particularly a disappointment for Lenovo, who had almost caught up to Samsung in China, but now projections are 15% lower than expected.

sony;coolpad i have never heard about coolpad but sony seems to be under the chinees peace of crap. like this comment because it is imposible