The J-series is one of Samsung’s strongest performing lines and this could be the first of the 2018 models. The SM-J337 – likely the Samsung Galaxy J3 – showed up on GFXBench with familiar specs except for the chipset.

A pretty modern Mali-G71 GPU provides the graphics power. The number of cores is unknown (likely just one), but this architecture is used in the Galaxy S8 (Exynos 8895) and in the Galaxy A5 (2018) with its still unofficial Exynos 7885.

Anyway, the phone sticks to 2GB of RAM and 16GB storage of which about 9GB is user available. And it will probably launch with Android 7.1.1 Nougat, this is a budget model after all. 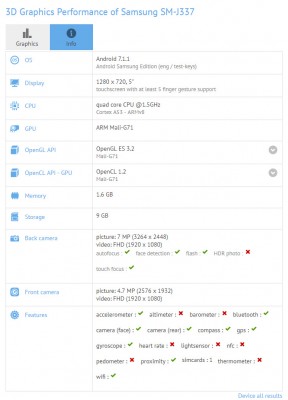 The main camera is different – it has an 8MP sensors (down from 13MP) and can record 1080p video. The selfie camera has a 5MP sensor and also does 1080p recording.

So not much will change with this entry-level Galaxy J phone. The screen once again 5” big with 720p resolution, no 18:9 widescreen here like the new A-series are getting.

Make normal battery this phone is not less than 4000 mA! Enough to scoff at people over your customers, living near the outlets, day in and day perezarazhenie your phone twice a day..