Being a monopolist is not always the easiest thing in the world. With AMOLED screens being all the rage in mobile devices lately, Samsung found it difficult to keep up with the high demand and, logically, shortages of the company's hottest new creations occurred, including the highly desired Galaxy S II. 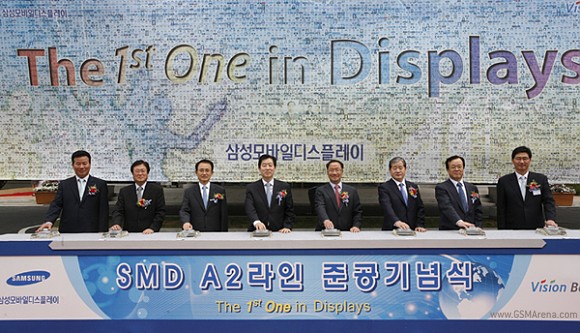 With the launch of one more production line however, it appears that the display shortages will soon be over, and even a surplus might come in sight.

Completed two months ahead of schedule, Samsung's 5.5 generation production line uses glass substrates which are three times larger than in the previous generation plant. This helps the company reduce the production costs and boost output. The factory's current capacity is 3 million screens per month, but it can reach 30 million at full capacity.

According to Reuters, the AMOLED screen market will more than triple this year to the staggering $4.26 billion. It is also expected to reach $14 billion by 2015 according to DisplaySearch.

Given the above mentioned numbers, it is little surprise to us that Samsung is planning to invest $5 billion in boosting its AMOLED production capacity this year.

Samsung bought out the company who designed AMOLED. That company who came up with it is now under Samsung's umbrella. Think what you want but AMOLED is Samsung's now.

Truth is, it looks better than LCD. That's what matters. Are you taking professional photographs on phones to check natural colors? If not, I'd rather go with good looking colors for daily usage. How about you?