An official ad photo of the upcoming Samsung T929 Memoir touchscreen cameraphone appeared online today. The American cousin of the Samsung M8800 Pixon has quite similar functionality to its European peer but sports a xenon flash and has somewhat different design.

After series of rumors and blurry pictures, the full specs list of the T-Mobile-exclusive Samsung T929 Memoir is finally revealed. The Memoir, as you probably have heard, is the first 8 megapixel cameraphone to hit USA and it also adds a xenon flash, a 3” touchscreen WQVGA display and 3G support to make for an attractive deal. 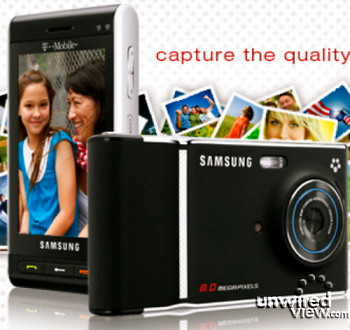 Some of its other features include quad-band GSM support, WVGA (720x480 pixels) video recording at 30 fps, Bluetooth and USB. There is no mention of a built-in GPS receiver but it might just be there with the same limited functionality as the Pixon (geo-tagging and 3rd party Java apps only).

Samsung T929 Memoir will start shipping by the end of February through T-Mobile USA, costing about 299 US dollars (230 euro) on a 2-year contract.

What if......U buy this fone and accidentally let it fall? The chance is so great that it screen will fail u, since it's a touch screen based. OH and bytheway OS's rules over propietary ones haaaa! Hail the open source community!

will this come out in the UK? i like the pixon but it has no xenon flash which this has. i wonder if this one has WIFI aswell.

I hope they do a comparison to the Innov8...