Samsung held a press conference last Thursday to talk about its successes of 2010, their plans for 2011 and more specifically to promote Bada 2.0 with the first information regarding the next 'Wave' of handsets. 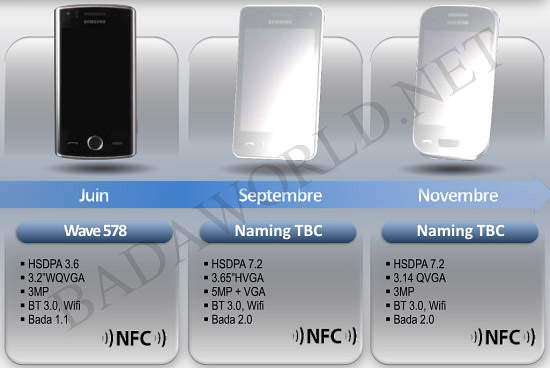 VP of Samsung France, David Eberlé has already spoken about their plans to release 3 new Wave handsets during 2011; the already announced Wave 578 and two other yet to be named models supporting Bada 2.0. The first, flagship device will come with a 3.65" HVGA display, front and rear cameras (5MP on the back and VGA on the front), Bluetooth (3.0) and WiFi, slated for a September release with the second handset offering similar functionality, with the exception of a 3.14" QVGA display and a 3MP camera (with no front facing camera to speak of) due in November. All these models will also have optional NFC support much like that found on the Galaxy S II.

Samsung France have also said that they plan to have over 10,000 applications on Samsung Apps and hope downloads exceed 50 million by the end of the year.

i want dowload 1 market in my phone bada 1.2

@Anonymous is right free apps are bull shit on bada