We have been hearing about Tizen for quite a while now but The Handheld Blog has gotten some hands-on time with a developer unit running the OS. 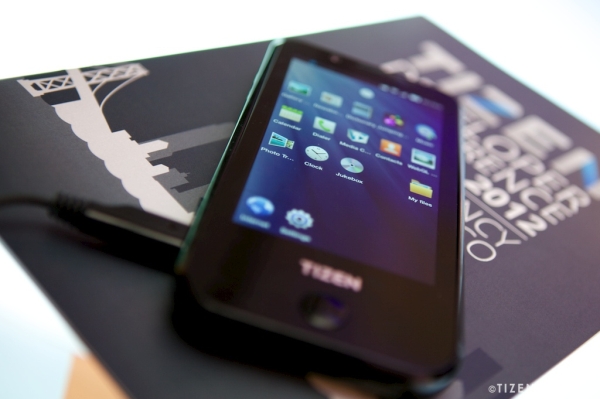 At first glance Tizen looks quite familiar to the TouchWiz implementation on Android but there are enough difference to set the two apart considerably. The apps seem to be placed directly on the homescreen like on iOS instead of a dedicated application drawer on Android.

Tizen uses a back key that always appears at the bottom right corner of the screen when you are within an app. In fact you get a bar at the bottom that houses all the application related functions that reminds a lot of Nokia Belle. To go to the homescreen, you click on the thin Home button in the top left corner of the screen that's always visible.

All the apps were in their early stages and the developer device didn't even have some apps like the camera. The performance was understandably a bit glitchy but despite this the browser performed very well and as we have seen before posted the best score for any mobile browser out there in HTML5test.

The developer device had a 1024 x 720 resolution display and a physical Home button although the final products can be completely buttonless, except for the usual power and volume buttons.

From the video, we weren't quite impressed and didn't see anything here that we haven't already on Android or Bada. Then again, the OS is still in its early stages but we don't see where Samsung could be going with this.

N9 with Meego is a very good phone, the best Nokia yet, try one and you will want one, others will copy but never match it. N9 owner.

yea only thing is dev support...:/ stupid nokia going with wp cr*p instead of meego! i cant fkin believe it, how much ms paid nokia for such disapointing decision??!!

y so retarded ui samsung? i have sgs2 but touchwiz?? omg thats crap and android is open so i put cm 9 stable, but really samsnung and ui dont go together! xD meego swype ui was a real inovation! atleast copy meego not fkin touchwiz from android...