As part of its new Ultra Smart series today Samsung unveiled the Samsung F700 smartphone. This revolutionary mobile will be showcased at 3GSM World Congress, the largest telecommunications event, next week. Expect our GSMArena.com live coverage on this and other new handsets straight from the place of action in Barcelona between 12-15 February 2007.

The revolutionary Samsung F700 would have a 5 megapixel camera with autofocus, HSDPA support, a 2,8" 262K colors TFT touchscreen display with the unusual resolution of 440x220 pixels, and a full sliding hardware QWERTY keyboard. 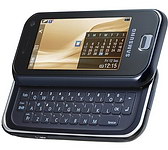 Beside the regular smartphone functionality, the Samsung F700 would feature a number of unique hardware characteristics. Measuring 104 x 50 x 16.4mm, the F700 would have an innovative touchscreen functionality called VibeTonz which allows user to actually feel the buttons on the touchscreen and pressing them produces slight vibrations for enhanced user friendliness. Furthermore the interface would feature drag-n-drop functionality which would enable users to control almost all of the features of the mobile without the need for stylus.

The idea behind Samsung F700 surely reminds of the famous Apple iPhone but it doesn't seem as a copy of the latter. Looking at the form factor the influence by the HTC PocketPCs seems a lot stronger. Expect a live update directly from the 3GSM in Barcelona where we would have the opportunity to show you live photos of the device.

How much does this phone cost? Does it have Wi-Fi?

Disappointing no Wi-Fi like the HTCII.However,it looks cute wit its sldind qwerty keyboard!

"What on earth could you ever dream of having in such kind of phone!?" Hmmm, let me think... WiFi perhaps ? :/