Do you remember those tiny DLP-based pico projectors presented at last year's CES? Well, this year Samsung have integrated one into a real working mobile phone. Imagine having a projector this size always with you.

For their first projector phone Samsung chose to go with Texas Instruments and their DLP-based pico projector module that was announced at last year's CES.

The new projector phone by Samsung is actually a working device and it should be available in Korea this year under the Anycall brand meaning it's not a GSM mobile. It has an OLED display, 5 megapixel camera and runs on the Samsung TouchWiz interface. 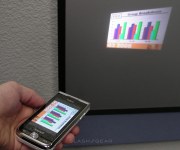 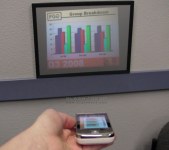 The model name of the Samsung projector phone is still a mystery since unlike what other websites are publishing, the SHOW sign on top of the device is not its name but a Korean wireless video service. The same sign can be found on most Anycall SPH handsets. 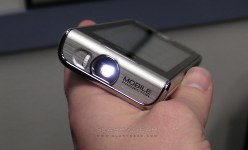 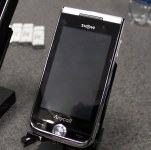 While image quality by pico projectors is not comparable to the one of their desktop counterparts (who expects that anyway!), the result is quite stunning and the gadget can be used for watching movies or browsing through the image gallery on the move.

The best thing about having the projector built right into the phone (instead as a separate device) is that there is no need of external video source and it's always with you ready for use. Of course, you'd probably have to bring your charger along too, as this beam of light seems like a true battery eater.

Here's a quick live demo of the Samsung projector phone:

Along with the mysterious projector phone Samsung also introduced a PMP, dubbed as MBP200. The latter has an integrated DLP projector, too. It also packs a 2.2 inch LCD display, DMB TV tuner and offers video and MP3 support. 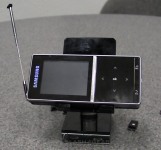 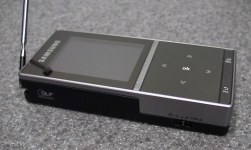 The Samsung MBP200 PMP has an embedded projector too

Its projector (made by TI again) is able of projecting images with a 480 x 320 pixels resolution and a size of up to 50 inches. The Samsung MBP200 has up to 16 GB memory on board (via an SD card slot) and sports a built-in speaker and a video input jack.

i have one.but projector and camera isn't working.i need a solution!!! help me plz.

how about games?? Isnt that one of the fanatics antics that everyone is looking for in a phone nowadays?? I mean can we play games through the projector too?? If it really can do that, Samsung Beam will be mine soon..

Listen your phone is too nice I just some information about this , is. The image is. Perfect like I see it on the board. The picture isn't crab. Thanks you could contact me to give information 347-634-0705, or send it to my email rogerpedro55@gmail....