Samsung leaks its upcoming devices in its own Android App

We have been speculating about what will Samsung reveal next week in Berlin for quite some time now. Thanks to the Korean company's own Unpacked Android app, we can now tell you which devices will be announced at IFA, exactly a week from today. 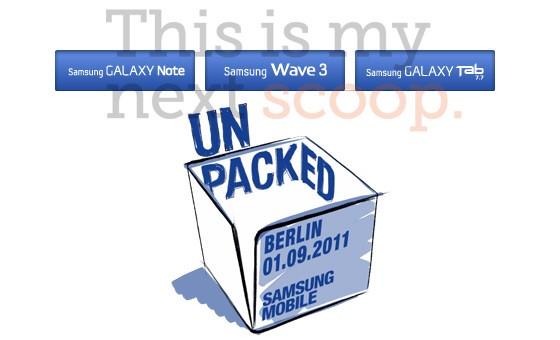 As you can see from the picture above, the trio of gadgets includes Samsung Galaxy Tab 7.7, Galaxy Note, and the Bada OS running Wave 3.

The Galaxy Tab 7.7 will most likely be running Android's latest Honeycomb 3.2, which was updated to support smaller screens as well. The Wave 3 on the other hand, will be packing the latest Bada OS. The Galaxy Note is definitely the big question mark here, since we don't know anything about it for the moment.

All 3 devices will be officially revealed next week in Berlin. In the meantime, feel free to tell us what do you expect from them in the comments section below.