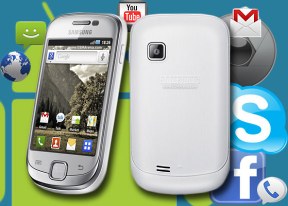 Retail box enough to get you started

The Samsung Galaxy Fit is shipped in a small box featuring a MicroUSB cable for computer connections and charging, a charger head, and a 2GB complimentary MicroSD card with an adapter.

Compared to the Galaxy Mini, they squeezed a bigger screen in what's basically the same package. That's exactly what we meant when we said the Mini's screen could’ve been bigger.

The Galaxy Fit is a simple all-plastic phone that will not stun onlookers but won't give the wrong impression either. The design is clean, uncluttered, the most prominent accents being the chrome color bezel and the grooved pattern of the rear. The phones looks well built and is nice to handle.

The front of the device features the 3.3” TFT touchscreen of QVGA resolution. The poor resolution is something users need to accept in a low-end smartphone. The capacitive unit is very responsive and supports multi-touch but the graphics look bad: grainy and with poor contrast.


Above the screen, there’s a proximity sensor. An ambient light sensor is missing so you’ll have to manually set the brightness to match changing lighting conditions. Fair is fair though: using the Galaxy Fit S5670 out on a sunny day won’t be a problem.

Below the display, there is a single hardware button: the central Home key with two capacitive controls either side: Menu and Back. It's the same layout as in the Galaxy Mini, only the latter has all hardware buttons. The capacitive keys on the Fit don't have haptic feedback - there isn't a setting for that in the menu. Touchscreen haptics are disabled throughout the interface.

The Home button is set within its own frame and in no way interfering with the other two keys. It has a nice feel to it thanks to the brushed-texture finish. It tends to wobble a bit when you place a thumb on, which does feel cheap.

The nice texture on the Home button and capacitive buttons

The top of the phone features the connectivity ports: a 3.5mm audio jack and the MicroUSB port, hidden under a sliding plastic lid.

The right side holds only the power/lock button. It’s thin but sufficiently raised with good press.

The right side of the phone • Volume rocker

The left side features the volume rocker and MicroSD card slot, hidden under a plastic flap.

The lack of a proper shutter key is a bigger problem here than on the Galaxy Mini, considering the Galaxy Fit's autofocus camera.

The camera lens at the back has no actual protection against getting scratched in your pocket. There’s no flash of any kind either.

The back has a textured non-slip finish. It doesn’t quite affect the actual grip but makes the device a little more appealing. The matt finish is fingerprint-proof but the thin grooves do tend to gather dust.

The loudspeaker grill has got a tiny nub to prevent it from getting muffled when resting on a flat surface.

At the bottom of the phone, the mouthpiece is the only thing to note.

Removing the back panel reveals the 1350MAh Li-Ion battery and the SIM compartment. You shouldn’t expect any miracles in terms of battery life. Android phones are power-hungry creatures and, as we saw with the mini, the low-res screen isn’t enough to make up for that.

Still the Fit easily gets you through a day of really heavy usage, which is, by today's standards, quite a good achievement. Sparing use might even give you a two or three day interval between charges.

The Samsung Galaxy Fit S5670 is a friendly little phone that handles comfortably. The all plastic build is acceptable – the important thing is the phone feels durable.

The poor screen resolution is the thing to consider - though it isn't a deal-breaker for the intended audience. Even the limited app compatibility won't be that much of an issue for people coming from feature phones.

The Galaxy Fit feels good in the hand