Samsung has started pushing out a new update to its Galaxy A5 (2016) smartphone. Currently rolling out in Europe and weighing in at over 20MB, the update brings along Android security patch for the month of October. 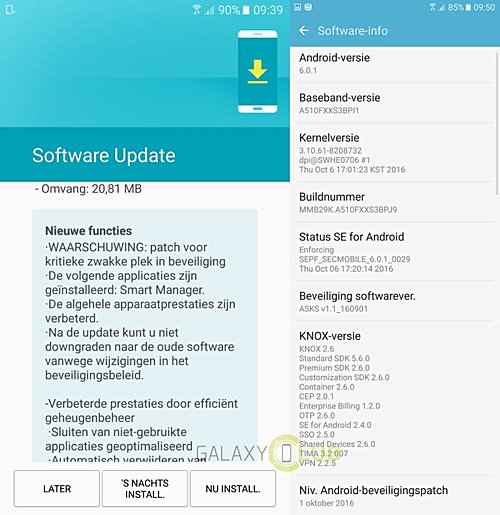 In addition, the change-log for the update reveals that fix for a critical security flaw is also included, although details aren't mentioned.

As is usually the case with OTA roll outs, it may take time for the update to hit your device. Meanwhile, if you feel impatient, you can manually check for the update by heading to your handset's Settings menu.

I have the same fone sm-a510f no probs from previous os to marshmellow 6.0.1 works better no over heating now so all in all the mmb29k-a510fxxu4bqca firmware is exellent if u need to root u flash with odin in recovery on phone vol down home and power...

My Galaxy A510 FD behaving strange. It randomly drops the data connection signal when running at dual sim but works fine when i turn off one sim. I hope this issue will be resolved after this update. Anybody have solution for the addressed problem pl...

Well, ironically custom ROMs often get the latest security patches sooner than majority of Android manufacturers out there. Many custom ROMs have adapted the October security patch well in advance. Meanwhile, we can probably count by hadn't how many ...