Samsung's event at CES 2015 was lacking in smartphone flair, instead focusing on domestic appliances and what they called SUHD television. In South Korea though, they are launching the Galaxy Grand Max which is to hit local shelves on January 9 at KWR 319,000 ($290). 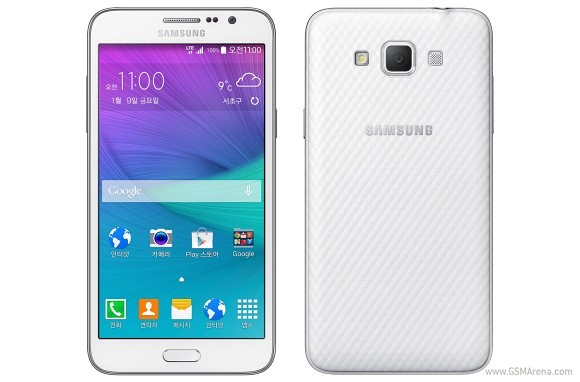 From the front the device is an unmistakable member of the family, so much so that it is becoming increasingly difficult to tell which exactly Galaxy this is. The back is what distinguishes it with yet another iteration of the faux leather concept around the otherwise familiar flash-camera-speaker layout.

The phone features a 5.25" display of 720p resolution in a slender 7.9mm body weighing in at 161g. Running the show is the decent Snapdragon 410 with its CPU clocked at 1.2GHz and a modem supporting LTE Cat 4. It is joined by 1.5GB of RAM and 16GB of built-in storage, as usual with a microSD slot for expansion. Power will be provided by a 2500mAh battery, which should be about adequate.

The main camera is a 13MP unit, but Samsung is marketing the Grand Max as a selfie device stressing the 120 degree wide angle lens of the 5MP front snapper. It also allows voice operation to let you focus on making funny faces instead of shutter release.

Source (in Korean) | Via
Related articles

samsung galaxy grand max is superb phone.i am using it since 2 months it working very fine.camera quality is superb both rear & front.it never hang while playing high end game.picture quality is awesome.i think this is the best under 12k-13k.so f...

Not a selfie phone but it is a selfish phone.