Oppo's first 18:9 smartphone is nearing an official unveil. The Oppo F5, which has its focus on being a masterful selfie snapper made a new appearance thanks to an ongoing campaign in the Philippines.

The phone's latest appearance is in the form of a video by ABS-CBN Lifestyle in which beautiful models are taking selfies with the phone. You can see the Oppo F5 from all sides, showing its nearly bezel-free 18:9 screen, its 20MP single camera on the back and its 16MP dual camera on the front.

And if you follow the hashtags #OPPOF5 and #CaptureTheRealYou on Facebook you can see a lot more of the Oppo F5. That same ad campaign in the Philippines confirms that the phone is due in October 2017 while some sources claim it will be out on the 26. 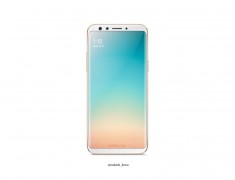 While still preliminary the specs of the Oppo F5 point to a 6-inch screen, 6GB of RAM, 64GB of storage, maybe a Snapdragon 660 chipset and a 4,000mAh battery.

Mediateck is bad, Snapdragon is better.