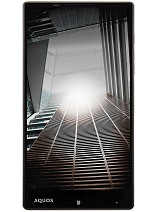 Titus , 16 Jul 2017Just a question people. Will not it be up-gradable to android nougat? The processor and the RA... moreYes there is Nougat available but only for NTT Docomo ver. (SH-03G) and KDDI au.

Just a question people. Will not it be up-gradable to android nougat? The processor and the RAM can handle android nougat surely. Could they upgrade this phone? I consider to buy one. It is pretty unique and I have never seen someone here in the Philippines using that weirdly beautiful phone. Where do I buy? I do not see this phone in any mall here in the Philippines.

Sharp has some cool stuff coming out in 2017.

Roland, 01 Jul 2017My father was a technician in Sharp company in Lebanon . the company now closed . It was one o... more I would like it to come back too.

My father was a technician in Sharp company in Lebanon . the company now closed . It was one of the best electronics in Lebanon now it isn't . I hope it will come back again .

Excalibur, 04 Dec 2016Only if Sharp sell it harder around the world instead of staying in Japan... The world would'v... moreThey where testing it but the hardware was not that great for the cost like the screen actual flexed if you pressed to hard and scratched super easy!

Also people do not like to buy phones from companies that are not well know for it which is why most unknown companies start off with cheap but decent phones then expand into the higher end market just think of any Chinese phone maker as an example!

wondering how/where to get Sharp unlocked mobile phones outside Japan??

Japanese Beast, 07 Nov 2016Xiaomi just copied this phone and named it Mi Mix. Chinese lack creativity, they only know to ... moreI agree, but they did a beautiful job with the ceramic case and the 4,000 mAh battery, now al it needs is make it only wireless charger, only wireless earphones, fingerprint reader ON the screen, seal it completely to make the first full waterproof phone to make the perfect phone, and a rough version with a mini solar panel in the back would be awesone for us who live on/near the beach

Anonymous, 17 Nov 2016They bought it from Sharp, I 'll see this as a win win situation for both side.Only if Sharp sell it harder around the world instead of staying in Japan... The world would've been theirs.

But as a person who knows this I'll choose the sharp one over whenever I buy one.

Japanese Beast, 07 Nov 2016Xiaomi just copied this phone and named it Mi Mix. Chinese lack creativity, they only know to ... moreThey bought it from Sharp, I 'll see this as a win win situation for both side.

NeonHD, 17 Oct 2015It's sad to see a unique phone like this to be so underrated. Sharp certainly needs to step up... moreI have a Aquos Crystal..Have had it 2 years....and it has been a very reliable phone.. why take the same platform pump up the os... do better than lollipop.. it's ok, but im sure Sharp can do better...Xx is not available in the US....?Wow

Xiaomi just copied this phone and named it Mi Mix. Chinese lack creativity, they only know to steal.

Bahh when this phone will selling in Indonesia

just to look at the look man.

The screen is awesome(not suprising since they sell HD TV's). Just pretty hard to get.

I actually have owned one for almost 1 yr. The bezels (or rather the lack of) is great and the build quality is excellent but there are certain points that make it a frustration to use
1) Lagginess. For some reason the phone lags like there is no tomorrow. I am suspecting it is due to the Softbank bloatware but disabling most of it doesn't help much. Either that or its the overly aggressive thermal throttling on the SD810. In anycase, I couldn't solve it and it is a major pain :(
2) the lousy main camera. The main camera is S***. The images produced are horrible in auto mode. In manual mode, you can still salvage a passable photo but still far away from the quality on corresponding flagships
3) Software update (or the lack off). Lets face it , if you are using it out of japan, you are stuffed. Without a Softbank unisim, you basically cannot updtate the phone and even if you do, you are still on lollipop now. That's like unforgivable for a last year flagship
4) Sound . The speakers are tinny. With the bezeless design, sacrifices are necessary but you will really strain your ears to listen even at max vol

So difficult to get it.

How to hard reset this phone?