Sharp is going to announce a couple of bezelless smartphones on July 17. Now that we're just five days away from that event, an image reportedly showing one of the upcoming devices has been leaked in China. Interestingly (or oddly, rather), the way it's framed quite perfectly matches a teaser photo of the Essential phone by Android co-founder Andy Rubin.

That said, Sharp's handset does have a slightly different design language, though it too seems to incorporate the front-facing camera through a cutout in the middle of the screen. The device will most likely have its fingerprint scanner on the rear, according to the source of the leaked image. 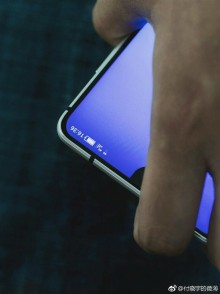 Sharp's bezelless handsets will bear the model numbers FS8010 and FS8016, and the only rumored difference between these will be the chipset used: while the FS8016 will be powered by the Snapdragon 660, the FS8010 will have to make do with the SD630.

ever though about how they could be in prototype cages?

a snapdragon 830 big lol. These rumors get better and better xD

Very unpleasant and displeasing to look at, hope this isn't the final design.