Another thing to look at is HDR mode - all phones but Nokia's have it, though this is a good place to let the wide dynamic range of the PureView sensor shine. As we mentioned already, EV bracketing lets you do HDR if you really need it, but you'll need to do post-processing for that. 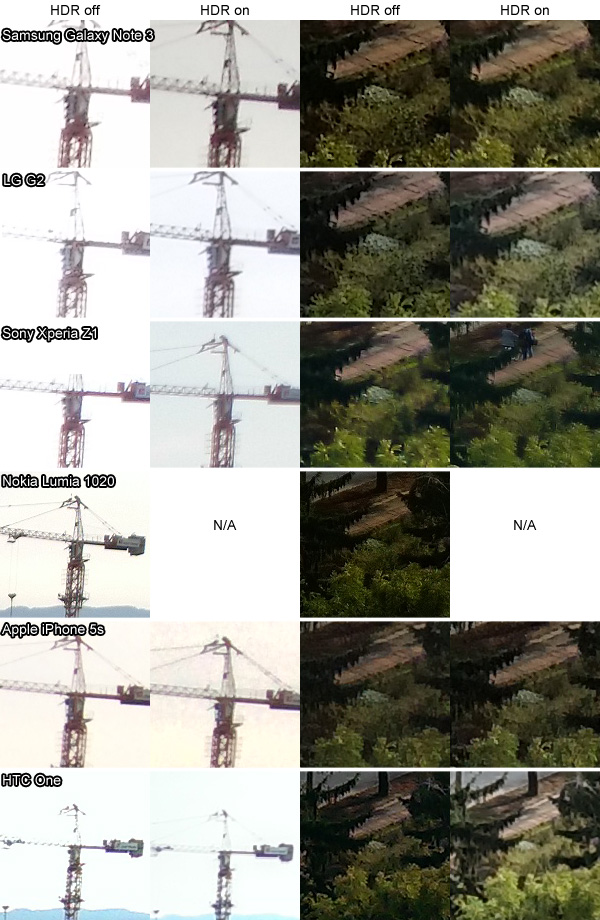 The thin silhouette of the crane against the clouds with the sun behind them is lost on some phones, while the relatively dark shadow of the building causes yet more headaches for the cameras.

The Samsung Galaxy Note 3 looks pretty good here - it resolves the crane even without HDR and with it, it fills in the sky better. It leaves the shadows almost untouched, perhaps for the best - squeezing too much dynamic range could degrade contrast and produce a flat unrealistic photo with poor contrast.

The Apple iPhone 5s also looks pretty good in normal mode, while the effects of the built-in HDR are pretty minor. We do have one big complaint here though - strong artificial noise in the sky. You can see it better in the full resolution shot below. That doesn't speak well of the iPhone's processing. The iPhone 5s may have some advantages to a regular shot, but they are the least perceivable.

The LG G2 has big issues with this shot due to its tendency to overexpose photos. HDR mode helps a bit, but imperfect alignment of the exposures smudges out some detail in the shadows.

The Nokia Lumia 1020 photo (we took the 5MP one) looks pretty great though - the crane is all there and you can see detail in the foliage in the shadows. A single wide dynamic range shot has certain advantages over stacking multiple exposures into one HDR photo - for HDR all objects in a photo must align or the detail will get badly smeared. This means handshake and moving objects can be an issue most often than not. Still, with that dynamic range it would have been amazing if it had an actual HDR mode - except just two exposures would take about 8 seconds with 1020 slow shooting speed.

The Sony Xperia Z1 HDR mode does a good job of enhancing the highlights, but the foliage becomes a water painting due to either misalignment of the photos or issues in processing.

The HTC One does the worst here, actually losing detail compared to the normal shot. The highlights look the worst and the shadows are over-processed to the point of looking bad.

The LG G2 and the Samsung Galaxy Note 3 both have a spherical panorama option, but since all phones have sweep panorama we'll compare that instead.

The Samsung Galaxy Note 3 produced a panorama with a whopping 60MP resolution with tons of detail and very little stitching artifacts (the tiles on the ground get a little messed up and so does a moving car).

The Apple iPhone 5s managed only about half the resolution - 27MP - and the panorama isn't quite as wide and the colors look a bit dull, but it still looks great and with almost no stitching artifacts. Best if all, new to the iPhone 5s, the exposure of these panoramas turn way better. It's almost HDR-like, which is what puts it on par with the Note 3.

The HTC One did well here too, producing a wide panorama even if the resolution is rather low (just under 10MP). There are a few blemishes in the stitching, but nothing major.

The LG G2 panorama is reasonably wide and the stitching looks okay, though the 6MP resolution is unbecoming of a 13MP camera and a Snapdragon 800 chipset. The biggest issue is the exposure - the phone just didn't do a good job of handling the transition from the shade behind the mall and the bright, sunlit areas.

The Sony Xperia Z1 is finicky with panos - your panning shouldn't be too slow, but not too fast either - and it achieved the lowest resolution of the bunch, 5MP (from a 20.7MP camera and with a Snapdragon 800 doing the math, it's just poorly written software). The panorama is full of ghosting artifacts too. At least objects are roughly where they belong, which can't be said for the next phone.

The Nokia Lumia 1020 panorama has 12MP resolution, but isn't very wide. The stitching, however, belongs to the abstract school of art, not to mention that the white dots the camera UI presents are not the ideal solution (a couple of the dots were over white clouds, which made them hard to spot). The app also tends to put each dot higher up than the next one, so you end up with the phone tilted up even if you didn't start that way.