Most photos are taken during the day, but the mark of a great camera is low-light performance. Phones are typically at a disadvantage here with their small sensors and weak flashes, but that's not the case with some of our contestants.

We broke this challenge down in two, depending on whether flash was used. Sometimes you just can't use flash, for example, if your subject is too far away - and as we're about to see, "too far away" is not all that far from some phones.

Here are the crops we made from the best and worst photos we took with each phone. This image shows the results for both cases - flash off and on - to demonstrate what kind of difference flash makes (or fails to make). The worst shot shows how consistent a phone is, that is, can you snap just one photo with it and count on it being as good as possible. 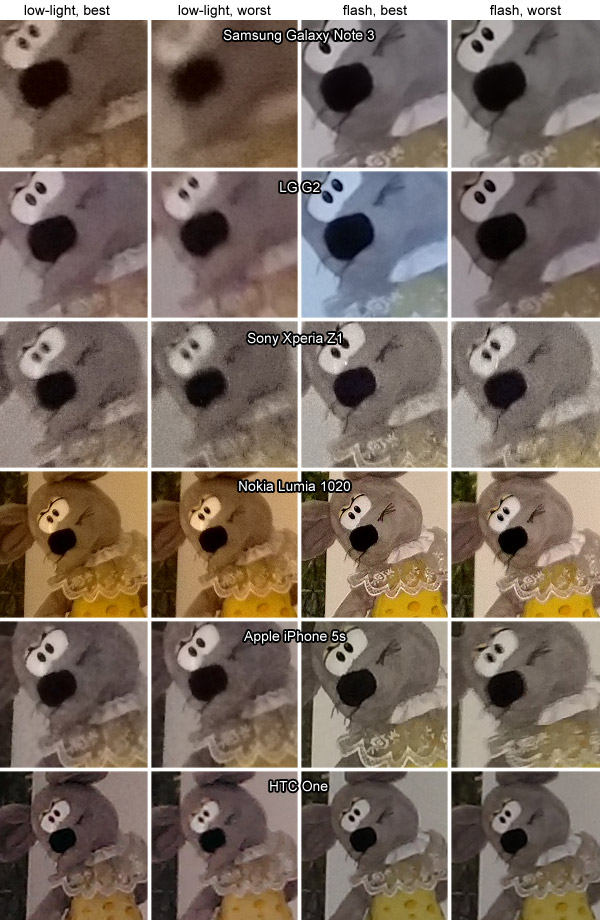 The Nokia Lumia 1020 crushes the other phones in terms of resolved detail - we're using the 5MP shots here - the full-res shots have a lot of visible noise and it makes more sense to share the 5MP supersampled image. You can see the whiskers on the mouse and facial detail. The difference between best and worst shot is minimal too, but the phone completely missed the mark on the white balance. The wall behind the mouse should have been white.

This test is the HTC One's forte and the amount fine detail trumps that of the 13MP and 20.7MP competitors. White balance is off and there's some visible noise, but the HTC One performed quite reliably here.

HTC One, flash off: best and worst

The Apple iPhone 5s did quite well too - it has a bigger sensor and wider aperture than the previous model, but on paper it doesn't have too great advantage over the other 5 phones in this shootout. And yet, the amount of resolved detail looks good despite the noise, and white balance is decent. Plus, the worst shot looks virtually as good as the best shot, which makes the Apple smartphone one of the most reliable when the lights go out.

The LG G2 has OIS, but it drops the shutter speed too much and shakiness still manages to sneak in - the worst shot is noticeably shakier than the best one. Photos don't have a lot of noise, but that's due to aggressive noise reduction, which takes its toll on fine detail too.

The Sony Xperia Z1 also has the advantage of downscaling its shots - we used Superior Auto for this test. Even that left the low-light photos quite noisy, and lacking in detail.

Finally, the Samsung Galaxy Note 3 had quite a hard time in this test - a large portion of the shots we took turned out blurry beyond usable and even when we picked out the best shot it was nothing spectacular - leftover noise even after heavy noise reduction that takes away most of the detail doesn't make for a great photo.

We turned the flash on and took new photos, again picking the best and the worst.

The Nokia Lumia 1020 dominated even more decisively in this test - the powerful xenon flash helped the already capable sensor produce an amazing shot. White balance issues were mostly resolved (a hint of yellow still there to be seen) and you can see the fur and intricate lace details on the mouse. Results were quite consistent too.

The Apple iPhone 5s climbed to 2nd place here and for good reason - the dual-LED flash helped a great deal to capture hints of fur and a lot of the lace detail. The two-colored True Tone flash proved its worth and the result is more accurate than the Lumia photo in terms of white balance. The consistency was quite good too.

The strong flash saw the Samsung Galaxy Note 3 push up from the bottom and the camera produced decent, consistent results.

The HTC One is very close behind, it's just that the low resolution prevents it from capturing some of the finer detail. Its flash didn't help all that much though - it caused the noise to drop, but photos are underexposed.

HTC One, flash off: best and worst

The Sony Xperia Z1 flash is not particularly powerful and turning it on helped more detail come through but there was still a lot of noise in the shot.

The LG G2 flash didn't actually make a great difference in this test. There was next to no difference when we enabled it, except for a tiny bit of extra detail and the smartphone slid down the ranks. Things aren't as well defined as on the Note 3 or HTC One, though and shots are usable and consistency was good, it's the worst performer in this test. On one occasion the photo had a strong blue tint, though, and as luck would have it that was the best shot with the most detail.