A slew of Sony devices hit the US, Xperia Z1 included

Today marks the launch of several new Sony devices on the US market, namely the Sony Xperia Z1, Sony Xperia Z Ultra, and the Sony SmartWatch 2. 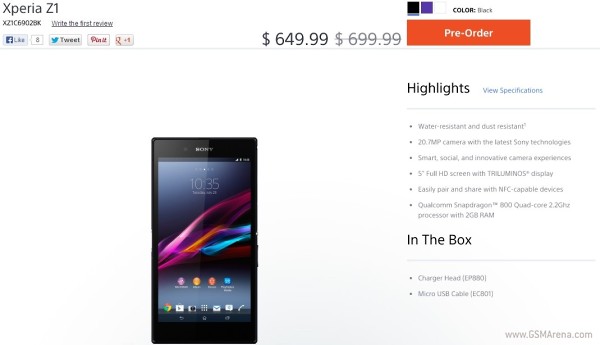 The 20.7MP Xperia Z1 flagship is for sale in Sony's online store for $649.99, although this version does not have LTE connectivity.

Unlike its smaller counterpart, the 6.4-inch Xperia Z Ultra phablet will come with 4G connectivity, and an unlocked pricetag of $679.99.

The SmartWatch 2, Sony's latest waterproof smartwatch offering, can be had for $199.99.

Both smartphones will be available in black, white and purple.

We were able to get a glimpse of the SmartWatch 2 at IFA this year, and were impressed by its high build quality, changeable straps, and IP57 water resistance rating. We'd go as far as to say it beats out the Samsung Galaxy Gear in terms of build quality.

The Xperia Z1 recently went through our 6-way cameraphone shootout, where it came in behind the Samsung Galaxy Note 3 and Nokia Lumia 1020. While the 20.7MP sensor had some good performance, Sony still has to work on the software to make use of its full potential.

+1 on waiting for the z1 f (honami mini) - actually been waiting for such a phone since I decided to replace my iPhone with an android...

i also waiting for Z1F