Slide shows iPhone 7 will have wireless charging and waterproofing

Rumors about the iPhone are like fishermen's stories - they grow bolder and grander as time goes on. A photo of a presentation slide lists the highlights of the upcoming phone.

The slide shows an iPhone 7 Pro (dual cameras) but is labeled iPhone 7 Plus. That aside, the phone will run iOS 10 (obviously) and will lack a headphone jack ( a rumor that has been confirmed and denied several times by unofficial sources).

It will allegedly have wireless charging and will be water resistant. Those are two things that Apple hasn't touched, while they are becoming more and more common on Android phones. 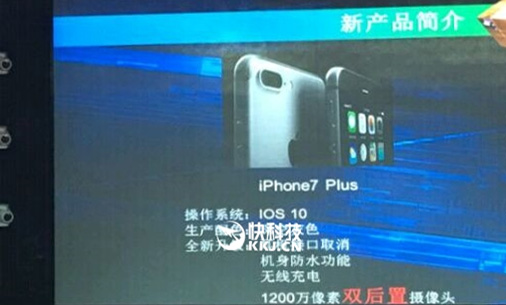 This isn't the first time we've heard of a waterproof iPhone 7 with wireless charging, but we're still not ready to believe it. Next thing you know, people will start talking about a microSD slot.

Actually waiting for Iphone 7 pro and note 7 and find out which one has a better camera. They are both only my second choice since X Performance was my first choice but since Sony didn't release XP on my country, they are my choices.

Maybe.. hopefully. I actually like the design of iphone 6 a lot, it's questionable durability and lack of hardware features kept me from thinking about buying it. It didn't have msd slot, neither stereo speakers, neither waterproofing. Hell my choice...