Finally, welcome to the V.I.P. section of the guide. There is a lot to choose from, since 2017 was a really plentiful flagship year. Plentiful, but also a bit bitter-sweet, considering we are now officially past the $1000 mark - a pretty ludicrous development in our mind.

Then again, the smartphone market is wider today than ever before, and you don't need to spend triple-digit figures to be satisfied with your shiny new device. If nothing caught your eye in the previous sections, you should probably go back and skim through them again. A good phone doesn't need to cost an arm and a leg. We promise.

In fact, to solidify our point even further, we will boldly state that you don't need to spend more than €600 if you are looking for a compact device. Hence, there will be no such devices on this page.

Having said all that, we had a lot of debates whether to split this category up further. However, that would mean acknowledging the need for €700+, €800 and so forth price brackets. So, we'll just assume money is not the main driving force behind your purchasing decision beyond this point.

Without further ado, enter the Samsung Galaxy S8+. There is not much we can say about this phone, beyond the praise we already gave to its little sibling. A stunning, industry-leading Infinity Edge display, only this time even bigger! Powering it - a no-compromise 2017 flagship internals and around the back - a stellar camera.

If you want the S8 design with a big screen - get the S8+. Skipping ahead a few beats, this seems like as good a place as any to talk about the Galaxy Note8 - the cream of the crop in Samsung's current lineup. Retailing boldly at around €850 - a good €200 more than the S8+, it constitutes a little bit more than a display size bump, with a pen.

We've said it before and we'll say it again - the Note8 is a different breed of device, one that Samsung is still attempting to keep to its professional and power user roots as best it can. Is it necessarily €200 better than the S8+ from an average user standpoint? Well, it is if you ask us, even if it doesn't look that different at first. It's noticeably faster (for some reason), the screen is less curved (so it's more user-friendly), and the dual camera and S-Pen are great perks to have.

On to camp Huawei then and the excellent new Mate 10 duo. Interestingly enough, the closest Galaxy Note competition by design, intent, and quality of execution currently out there in the vast Android realm.

Choosing between the €670 regular Mate 10 and the €760 Mate 10 Pro is, oddly, as easy, as it is complicated, depending on the situation. The choice might not even be yours to make if you want to avoid playing the import game and risking on support since most markets seem to have either one or the other available but never both.

If you do have access to both, you do need a list of your pros and cons: The Mate 10 has the bigger panel, but it is an IPS one and with the older and less trendy 16:9 aspect ratio. The Mate 10 Pro has a punchier AMOLED up front and center, but a lower resolution one, not to mention it's skinny and tall, providing less of a "phablet experience". This has also cost the Mate 10 Pro its hardware home button.

You also need to decide between battery efficiency, since the two handsets come in with a 9 or so delta in our battery endurance test. On a more positive note, at least that's the only dilemma you'll face regarding internals since the pair share the rest of them.

On to another interesting dilemma, between the LG V30 and the Pixel 2 XL. It is no secret that both devices come from the same manufacturer and share most of their hardware. In this case, when we say most, we do mean it. Unlike the two Mate 10s, the LG V30 is a lot more "glassy" than the Pixel 2 XL and leverages that for wireless charging. And that's just the tip of the iceberg. Some other differences include selfie shooters, batteries, the presence of a 3.5mm audio jack, to name just a few.

Still, those pale in comparison to the different camera setups, stereo speakers, and approaches to Android. All that being said and knowing full well we're welcoming a lot of hate in the comments, the only real reason to choose the Pixel 2 XL over the LG V30 boils down to whether you value any of these three enough to dish out €70 more.

Both the Pixel 2 XL and the V30 are already being discounted left, and right and we have every reason to believe this trend will continue in 2018. If you can't wait so long, at least try and look for a deal which gets the phones down to €800 or less so they constitute a good deal at the time of writing.

Finally on the list, we have the iPhone 7 Plus, for much the same reason we included its smaller sibling. At current prices, the iPhone 8 and 8 Plus just seem unreasonably expensive for the added value they offer. By the same logic, we can't really bring ourselves to recommend the iPhone X at over €1100.

There is an asterisk to add here, however. If you can live with 32GB of storage, then the €130, or so, price delta below the iPhone 8 Plus merits on older generation product in our opinion. If, however, that is not the case, you will be much better off getting the base 64GB iPhone 8 Plus, with its extra features, than opting for a 128GB iPhone 7 Plus model.

At the end of the day, if money really is no object, there are really no wrong choices at the high end of today's smartphone market. That being said, we really didn't do all these great devices justice with the few sentences we shared on their distinct individual traits. 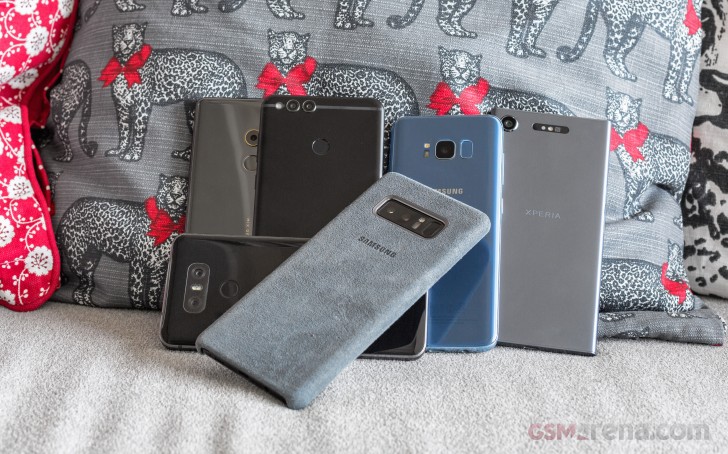 Be sure to hit up our reviews for a more in-depth look at any device in the buyer's guide that caught your eye. The opinion sections on the specs pages are a great resource for getting additional first-hand impressions and answers to specific questions as well. Happy shopping!