But it's Android that takes the cake - year-on-year basis it grew an astonishing 886% in the second quarter. Smartphone market grew 41% in the US with 14.7 million units shipped. Android devices accounted for 34% of those shipments. Almost a quarter of smartphones shipped worldwide are in the US, which retains its position as the biggest market for those devices. 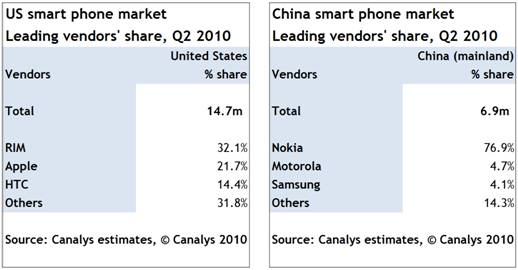 Android is also doing well in China (which is the world's second largest smartphone market). From almost no shipments an year ago, in Q2 2010 Android grabbed a 7% market share in China - 475 thousand units shipped. China's home-brewed OMS platform (Open Mobile System) a.k.a. OPhone, which is based on Android, managed 174 thousand units too and should continue to grow.

Nokia remains the world leader in smartphone shipments with a record 23.8 million units shipped for a 41% growth year-on-year. It's currently enjoying a 38% market share thanks to affordable smartphones like the Nokia 5230.

Estimates put RIM in second place with 18% market share and strong positions in North and South America with the BlackBerry Curve 8520 pointed out as a strong seller. Apple slots in third position with a 13% market share for Q2. Their shipments were unaffected by all launch issues with the iPhone 4 and grew up to 61%.

Nokia does not have the hardware to deal with Android. Eclair or Froyo will froze the 680MHz processor of the best Nokia unit (N8).