Counterpoint published some interesting numbers about daily smartphone usage and mobile technology attitude. According to the researchers, half of smartphone users spend more than 5 hours a day on their mobile devices, with 26% of all owners spending more than 7 hours. The annual spending on smartphone hardware across the globe exceeds $370 billion. 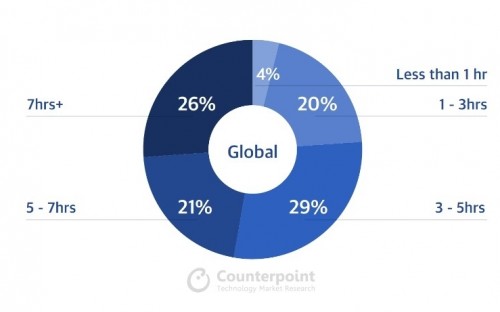 Counterpoint also published a detailed analysis of some of the numbers the company acquired. According to the analysts, users in developing countries tend to glare at the mobile screen longer than those from developed countries.

For example, 55% of all users in Malaysia spend more than five hours, while 43% of Japan claims to give only 3 hours of attention per day to the device.

The most popular activities on a smartphone are browsing the internet with 64% of all respondents, followed by gaming (62%), making voice calls (55%) and messaging (54%), without mentioning any particular message service, meaning it should include regular SMS, iMessage, Facebook Messenger, etc. 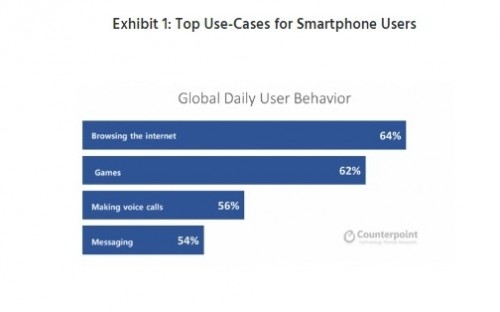 The replacement of a smartphone might be a tedious process, but the developing market is pushing towards a shorter time gap. Globally, phones are changed every 21 months, with Mexico averaging 18 months.

On the other end of the spectrum is Japan once again, where consumers prefer to wait more than two years (or 26 months, to be exact) before switching to a new device. 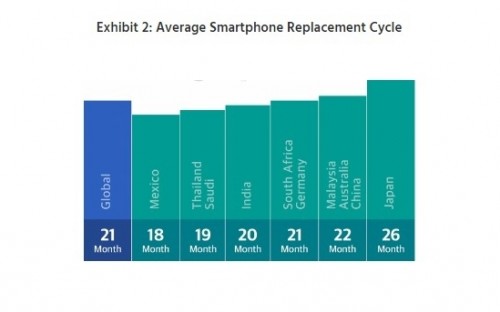 The price of the smartphone is also a driving force and Counterpoint measured this as well. Unsurprisingly, developed markets tend to spend more on phones - Saudi Arabia, Australia, and Germany are countries where half of the smartphone owners are willing to pay over $400 for a phone.

One-third of them is willing to even go higher than $500. India is the country where only 5% would pay that much. Still, 5% of Indians are more or less the same number of people as half of the Germans, Australians, and Saudis combined. 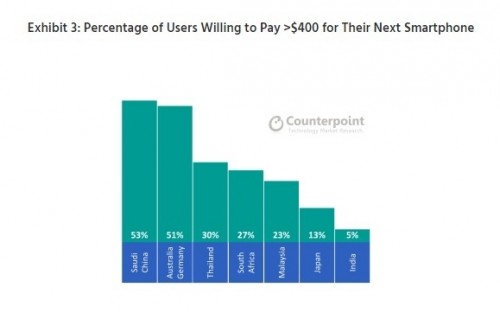 Digital payment and wallet apps are proving to be popular in East Asia, with 45% of smartphone users in Malaysia and Thailand using at least one service.

Those are some beastly specs, gotta cost at least $1,500.

Its a multiple choice where you can pick more than one.