Snapchat is one of those odd social app experiments that often confuse their very own user base, let alone newcomers. What started out as a fairly clever "no traces left behind" picture chat, has since exploded into a wild mess of often puzzling user content, specially crafted multimedia experiences within the Discover feature, as well as, more recently, a sprawling video sharing community. Amidst all this, there seems to be only one unifying trend – striving for revenue and lots of it. Be it from paid ad content, or sponsored video "lenses" or even paid replays of snaps, Snapchat has been doing everything in its power to back up estimates for the company's enormous market value.

Now, it seems, the playful white ghost has shifted its priorities towards sports fans and is striving to become the de facto social platform for sharing sports events and experiences. The newest effort to this end is a special score filter made available to users attending certain NBA contests. The overlay provides live scores for the game you are currently at. The feature is available at every NBA arena and some other matches. 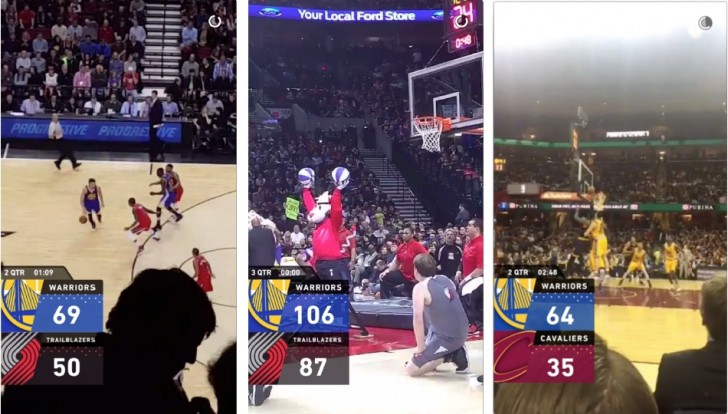 It might sound like an incredibly silly concept, but, oddly enough, it appears to be working. Just last week, Live Score geofilters saw 20 million views, gathered on content from 51 NBA games. At this point, we can't decide if the Snapchat team is just incredibly lucky, or full of brilliant social experts, as this new feature could very well open the way to a whole new stream or ad revenue.

And Basketball is not the only sport Snapchat is going after. It has been working with NFL to produce Live Story compilations for major games, as well as to offer fans the aforementioned Live Score filters. And with the US Super Bowl coming up, it is anybody's guess just how far Snapchat will manage to take its new trick.

what about Football (Soccer) or Rugby (American Football) and the others??

copy paste from FB or either way