We've seen a lot of leaks originating in the databases of the various Android benchmarks lately, and this one's no exception. What's a bit different than usual is that in this case we aren't sure what device this is going to be.

Rumor has it we're looking at the GeekBench hardware information section for the upcoming Samsung Galaxy A9. That said, the benchmark itself is calling the phone "samsung msm8976fhdlte-eur-open" for now. 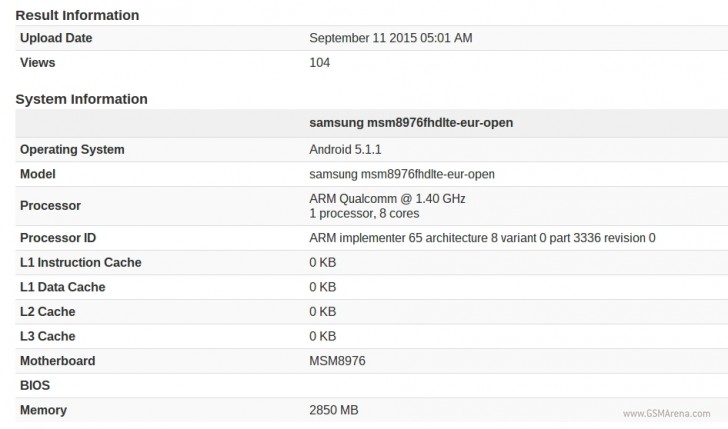 This lets us know that the device is rocking Qualcomm's Snapdragon 620 chipset at the helm. This is an SoC that will come with an octa-core CPU, pairing four high-performance Cortex-A72 cores with four battery-friendly Cortex-A53 ones. The former cluster can be clocked at up to 1.8 GHz, with the latter going up only to 1.4 GHz. The Adreno 510 GPU is in tow too.

The prototype that ran GeekBench was capped at 1.4 GHz, as you can see from the screenshot above. So its results are clearly not indicative of real world performance. The benchmark has also revealed that this smartphone, possibly the Galaxy A9, will have 3GB of RAM and currently runs Android 5.1.1 Lollipop.

If this is the A9, then expect it to also feature 4G LTE connectivity, with peak download speeds of 300Mbps and 100Mbps uploads, thanks to the built-in Qualcomm modem.

New Samsung Galaxy A9 have great specs: but much better if contained and magnesium alloy construction

Why you so stupid? Everyone knows that. You just google it didn't you.