Qualcomm announced its flagship chipset in the beginning of December at the Snapdragon Technology Summit. According to the latest leak from Weibo, the chipset company from San Diego is preparing three more SoC platforms for 2018 - Snapdragon 670, Snapdragon 640 and Snapdragon 460. 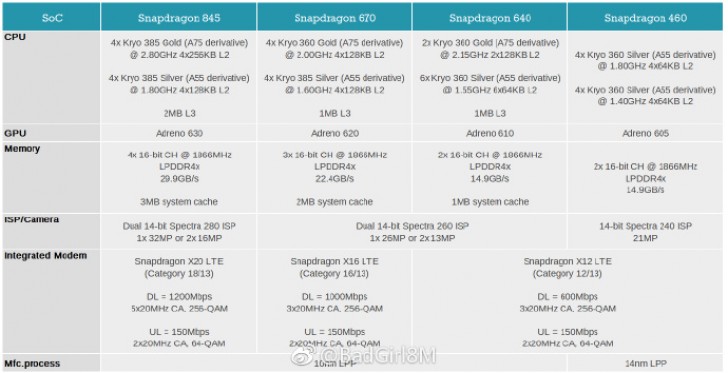 The modem of the Snapdragon 670 is expected to be X16 LTE Cat.16 with a maximum download speed of 1 Gbps and upload speed of 150 Mbps. This chipset might be targeted at upper midrange phones but with such specs, it might act as a sub-flagship platform.

Snapdragon 460 is sharing the same modem as the 640. Most likely aimed to power the most affordable smartphones, the CPU of the 460 has eight Kryo 360 cores - four at 1.8 GHz and four at 1.4 GHz. The memory has no system cache and the camera could be up to 21 MP with a Spectra 240 ISP. Unlike the other two, this chipset will be built on the 14 nm process technology.

Great, great, great, 14nm and 10 process chips that means that we are really going to have good battery efficient phones. Am happy to hear this. We will surely have Samsung and Xiaomi phones and few other phones we 2 days of heavy use batteries. I w...

Yea, they are equipped with powerful CPUs, but the GPUs aren't on par, unfortunately.

Right now, there isn't even a single phone with SD 636. The SD 640 would be a good choice for the sequels of Moto X4, HTC u11 Life, and even Nokia 7. But I could already tell that if that happens, their OEMs will most likely follow Samsung with its ...