A full unboxing of the Samsung Galaxy S4 LTE-A with the Qualcomm Snapdragon 800 processor has appeared online, further solidifying that the company is almost ready to launch the device in Korea on SK Telecom's LTE-Advanced network. 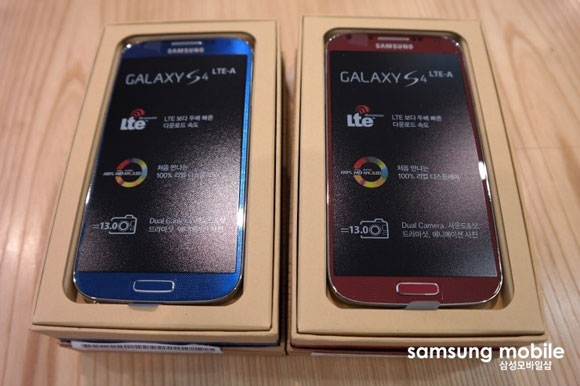 The device, carrying the model number SHV-E330S, will be offered by the carrier in the coming weeks in at least two colors - Blue Arctic and Red Aurora.

Here are the two Galaxy S4 LTE-A units getting the hands-on treatment.

The Samsung Galaxy S4 will be one of the first smartphones to support the new LTE-Advanced standard, which promises data transmission speeds of more than double those of conventional 4G LTE. AnTuTu benchmarks of the Snapdragon 800-running beast have also appeared online, but we'll be awaiting results from the retail unit to be sure of its performance.

An official launch date for the latest Galaxy S4 variation isn't yet confirmed, nor is the pricing (although co-CEO J.K. Shin did mention that the LTE-A version will be more expensive than the regular Galaxy S4). Customers who had purchased the Snapdragon 600 have already expressed their dissatisfaction of Samsung's move to launch a more powerful version of the phone just two months after they've bought theirs.

I want to buy this phone...