The iQOO Neo5 will be announced on March 16. That was revealed last week, this week the brand confirmed the murmurs that the phone will be powered by the Snapdragon 870.

The chipset will be paired with fast UFS 3.1 storage and up to 12 GB LPDDR5 RAM. Memory Fusion, a technology developed by vivo for OriginOS, will make those 12 GB feel like 15 GB (it’s similar to having a swap partition). There should be an 8 GB version as well (advertised as 8+3 GB because of Fusion). 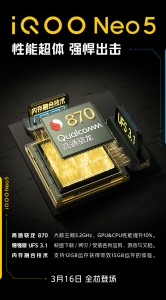 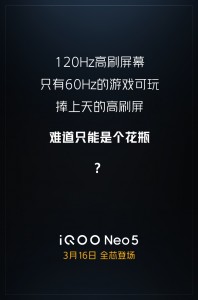 The brand is not denying the 120 Hz rumors and mentions an “independent display chip” that will lower the power requirements of the high refresh rate AMOLED panel. iQOO is also teasing fast battery charging (66W FlashCharge). And we’re getting a whiff of carbon fiber.

Nubia red magic with memory fusion would feel like 21GBram that would be pretty damn interesting.

Price is too goddamn high.