Shortly after we caught a glimpse of the quad-core Qualcomm Snapdragon S4 Pro chipset tucked in Sony's upcoming C660X 'Yuga' Android powerhouse in Antutu benchmark results, the handset's screen resolution emerged as well. NenaMark2 scores revealed that a 1080p (1920 x 1080 pixels) display will sit on top of the powerful internals. 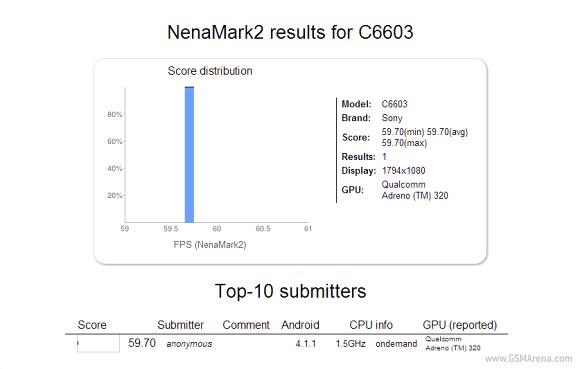 The benchmark score, which has subsequently been removed from the NenaMark2 database, points at a resolution of 1794 x 1080 pixels. The remaining 126 pixels are likely used for the Android on-screen buttons.

There is no information on the physical size of the full HD display. Given the massive amount of pixels involved though, it is highly unlikely that the unit will be sized below 5". A recent announcement from Japan Display Inc. regarding the start of mass production of 5" TFT-LCD IPS display modules with 1080 x 1920 pixels resolution and pixel density of 443ppi points in this direction. Sony Mobile Display is involved in the aforementioned company together with Toshiba Mobile Display and Hitachi Displays.

New info, "The Japanese calligraphy is yūga (sometimes written as yuuga or yuga), which means elegance" Calligraphy?? See where this is going? S-Pen! Sony already has something brandnew using a pen and win8 software for it, loo...

I dnt thnk there is need to make fun of others culture and beliefs.....can u show me any link which says it means elegance in japanese.....